It's very important, when you're 'freelancing', to get out of your house at least once a day and do something involving sunlight and the dissipation of energy, otherwise you might find yourself lying awake all night and all morning, watching as the light creeping from under your curtains turns from streetlight brown to lapis lazuli blue to emerald green before settling back to the grey we're all used to, a new day letting you know it's just waiting to go, even if you didn't take your chance to charge up beforehand.

But if you're out there, all bleary eyed and shocked that the trees are green again, you have to be careful or you might miss little details like the moron who's been graffiting power boxes along the canal next to Victoria Park in eest luhnduhn.

I might have just called them a moron, but personally I think they're probably a lot smarter than I; normally street furniture or any old utilitarian urban surface is used graphically for three things - graf, tags and polemic. Usually a political position has to be somewhat marginal for someone to feel that there is no channel open to them other than walls, but this particular person seems to identify with the current 'line' so perfectly that they just had to ejaculate it out everywhere, thoroughly confusing me in the process... 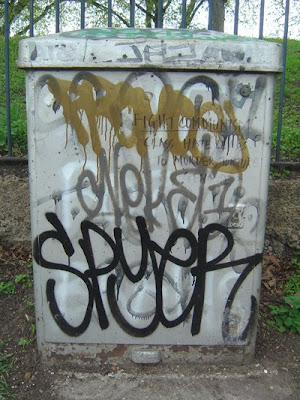 riiiiiiiiight, if you say so... 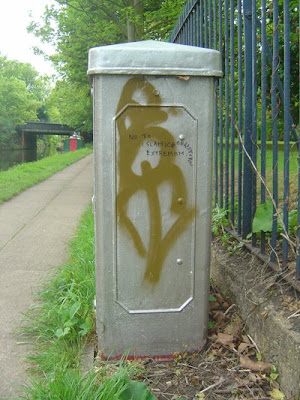 which has had "+CHRISTIAN" scrawled alongside... 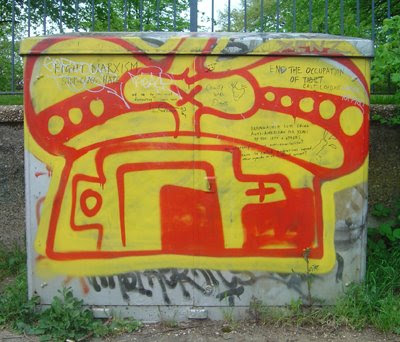 END THE OCCUPATION
OF TIBET

I love the fact somebody has crossed out 'TIBET' and put 'EAST LONDON', which has then been followed up with 'FROM YUPPIES', ah, lovely.

BRAINWASHED INTO BEING
ANTI-AMERICAN FOR YEARS
BY THE LEFT + OTHERS

with a rather ambiguous response:
"an overemphasis on anti-americanism?
have so called progressives imposed
thier (sic) agenda on us without consent?", next to a spurting cock.

the same responder might have written this one:
"NO NO to ho chi min
democracy is gonna win
free laos
free vietnam" 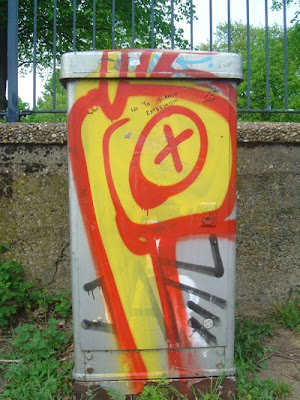 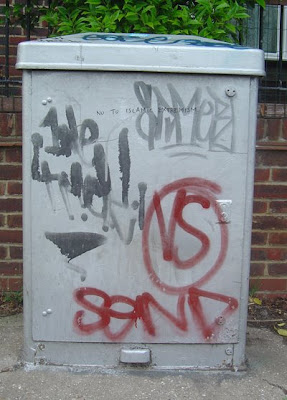 I suppose I'm just a little confused as to their motivations; I'm partly imagining a march where all the placards read "Everything is just as it should be", "We support the elites!", or just "Carry On!"
at 11:47 pm 2 comments: Responses:

Before I put any new writing up, I recently found these videos. There's a post on the way all about Godowsky, and how his transcriptions exemplify an approach to early twentieth century compositional innovation that never really caught on, and how this aesthetic method can be abstracted as a lost, alternative form of avant-gardeism.

This recording is apparantly from 1930, the year that Godowsky suffered a stroke in the recording studio that put an end to his career, part of the string of bad luck that made his final years some of the worst that you could possibly hope not to have to go through.

It's Chopin's B flat minor sonata, op.35, the third movement of which I've just finished a new guitar arrangement of, which I might post up soon once I've edited it properly.

Email ThisBlogThis!Share to TwitterShare to FacebookShare to Pinterest
About: Chopin, godowsky, music, romanticism The hawk-eyed amongst you might recognise yours truly in the above photograph.
Anyway, here is some coverage:

We've created the 'Cocktail Music' for an event to be held this and next weekend in London. Bompas & Parr, of Architectural Jelly Banquet fame, are putting on a walk-in-g'n't, which promises to be quite the experience.
at 6:44 pm No comments: Responses:

Email ThisBlogThis!Share to TwitterShare to FacebookShare to Pinterest
About: me me me, music, sound

Infinite Thought writes up a recent perambulation we undertook around some parts of London. Of course, I can never tire of the Barbican, and like one of those Victorian fictions where a race of people are discovered living under the city, one can imagine the life of a reclusive author, living in a flat in the Barbican, taking their meals at the canteen, visiting the library, the conservatory and the gym, having important things sent in, sending out manuscripts. Eventually the writer has a child, a daughter, who is sent to the City of London School for Girls (in the Barbican), where she shows a remarkable talent for the violin, eventually securing her a place at the Guildhall School of Music and Drama (also at the Barbican), before moving out of the writer's flat and into her very own Barbican flat. I'm not sure whether this is a horror story or not, however...
at 10:22 am 2 comments: Responses:

Email ThisBlogThis!Share to TwitterShare to FacebookShare to Pinterest
About: architecture, Barbican, London, Modernism

Email ThisBlogThis!Share to TwitterShare to FacebookShare to Pinterest
About: Sarcasm

That's Fine By Them.

Fucking Bastards...
at 1:21 am No comments: Responses:

He's come about the reaping..?

I’m reading Christopher Belshaw’s Annihilation at the moment, a hearty jaunt through the philosophies of death. It seems that most (or at least a lot of) contemporary thanatology seems to come from that strange section of Anglo Saxon philosophy that deals in no-nonsense, common sense language, useful perhaps in ethics and for lawmakers, dealing with cases of comas, persistent vegetative states and so on, but often infuriatingly complacent with norms and full of assumptions and simplifications about what makes a subject.

In works like this, or the more entertaining Better Never to Have Been by David Benatar, the writers often struggle with words like ‘harm’ or ‘asymmetry’, attempting to cram subjectivity into charming little logic tables with columns and rows entitled ‘Unsatisfied (bad)’, ‘Absence of pain (good)’, or ‘Presence of sickness (bad)’, and other laughably inadequate descriptions of states of being.

When Belshaw discusses the possibility of ‘defining’ death, a definition being necessarily true in all cases, he (rather charmingly, and not entirely ignorantly) blunders across the field of aesthetics in an attempt to stress the inadequacy of absolute definitions; a passage which includes the following sublime nugget:

“We know that the Mona Lisa is a work of art, that bombing Fallujah is not, and we know these things even while being uncertain what to say about a number of problem works. Perhaps if we discovered certain further facts – Leonardo copied, Fallujah was planned by the Chapman brothers – then these judgements would need to be revised.”

At which point I nearly spat out my coffee.

Clumsy rhetoric notwithstanding, Belshaw is quite right when he points out that death cannot be reduced to a definition based on organisms, functioning and irreversibility, although his dealing with each of these cases lacks thoroughness: his difficulty with defining ‘organism’ (how much can you remove from an organism to change its identity? Can there be organisms within organisms?) puts me in mind of DeLanda’s New Philosophy of Society (not a great work by any means, but it does at least present an attempt at working through this problem), his definition of functioning – a thing doing what is supposed to – is inadequate, leading to him making statements such as;

“you and I are functioning organisms; Tutankhamen and Lenin are not”

when we could just as easily say that Lenin is the most functional out of the four of us, in terms of how much the organism effects other organisms or networks of organisms. But of course that is a bit too meta... Eventually Belshaw admits;

which sounds a bit like a desperate cry for phenomenology.

Perhaps it’s just the angle of approach I’m making towards this branch of thought, perhaps I’m too used to psychoanalytical or ‘Continental’ (ewww…) philosophy to really feel comfortable with the style, but one often feels that a bigger scope would be better for this kind of subject. Here’s some early Lacan, in a rare discussion of death, basically hitting the nail on the head – the problem of death is not death, the problem is life. Everything is dead, apart from these heaps of matter that somehow decide that they are selves.

“That is what life is – a detour, a dogged detour, in itself transitory and precarious, and deprived of any significance. Why, in that of its manifestations called man, does something happen, which insists throughout this life, which is called a meaning? […] A meaning is an order that suddenly emerges. A life insists on entering into it, but it expresses something which is completely beyond this life, since when we get to the root of this life, behind the drama of the passage into existence, we find nothing besides life conjoined to death.”

Of course, this is part of a discussion of Freud’s Beyond the Pleasure Principle, and comes at an early point before Lacan fully developed his concept of drive, but it thinks in the same direction that (oh here we go again) Derrida thinks spectrality: life and death are not opposites – there is death in everything, and if we are to deal with extinction as truth, the misrecognition of being, the concatenation of life-meanings as generated and perpetuated by the Symbolic (Lacan) or traces, archives, writing (Derrida) is already dead also. All being is haunted matter.

Anyway, I’ve got a little more Belshaw to read, perhaps the last chapters are on Meillasoux, Brassier and Metzinger, although I reckon that’s distinctly unlikely.
at 11:45 pm No comments: Responses: K-Punk, IT, ICR, Lenin and SDMYBT on protests.
at 7:48 pm No comments: Responses:

Email ThisBlogThis!Share to TwitterShare to FacebookShare to Pinterest
About: nothing
Newer Posts Older Posts Home
Subscribe to: Posts (Atom)