Here are more things to look at: 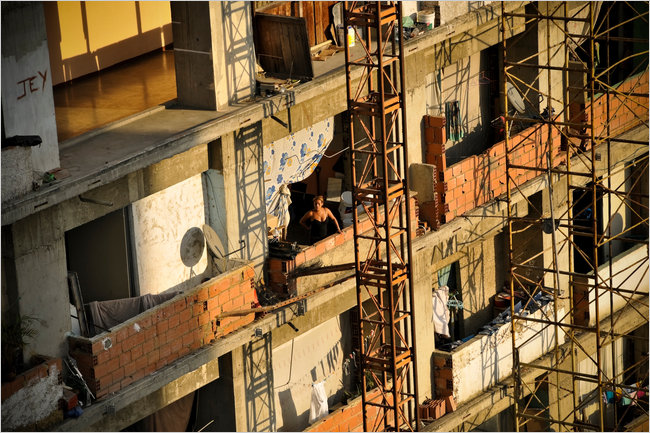 A video from the NYT about an unfinished Venezuelan skyscraper that is heavily squatted. If you disregard the pretty clunky politics then it's rather interesting.

---
Two brilliant posts by Adam Curtis. I've mentioned it before, but his blog really is something else. As the nuclear accident at Fukushima rolls on, Curtis dug out a near-20 year old film he made about the nuclear industry, which is -as you might imagine- prescient.

And then, what with the fact that we Brits are suddenly and without warning committing belligerent acts in North Africa, Curtis has prepared a potted history of humanitarian intervention, which is consummate. It also features a brilliant final line which is well worth sticking around for.

---
An excellent post on Bahrain by Bauzeitgeist, about revolution in a landscape of malls and business parks.

---
There's a Xenakis Symposium down at Goldsmiths, this weekend. I might pop down if I get the chance, and you should too! 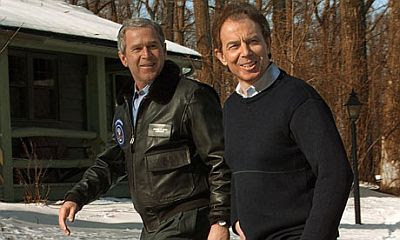 The incomparable Giovanni Tiso has written a piece at his Bat Bean Beam blog that is just blistering, about Blair and his mediations. If you don't know it yet, his blog is both consistent (one big post a week), and consistently excellent.

---
Francois Roche is being weird, as usual. Is this a rare example of a principled architect, or is it simply him showing off and playing up to his status as 'crazy frenchman'? I think I've met only one person who studied at Sci-Arc, and they were an arrogant cock, so there you go... Actually, hang on, I interviewed Benjamin Ball from Ball Nogues and he was lovely, so scratch that!

---
Chopin - Prelude No.2 in A minor by entschwindet und vergeht
Another arrangement by yours truly. I'm trying to record them now; as I've written (or almost written) so very many, I have gotten archive fever. This one is a bit sketchy but it's done, so I can move onto something else.

---
Geoffrey Hill's inaugural lecture at Oxford is online. I'm fairly new to his work compared to some people I know, but well, you know, everyone loves a bit of 'pinnacled corn'...

---
And there is far far far too much news right now. Thoughts go to the Japanese, of course, and Libyans, and Bahrainians, and Yemenis, etc. etc.

---
Back here in Blighty, we had a march the other day, which I attended.
I attended because I care about other people in the world, and also because I think that those in charge of our government and economy are thoroughly incompetent and must be immediately stopped from enacting their spiteful, vindictive, petty, damaging, greedy, myopic, thuggish agenda. It's as simple as that really.
at 10:49 pm No comments: Responses:

I have nothing more to say about this image.
at 4:25 pm No comments: Responses:

SO the last month was quite a strange one, all told. Inamongst all the shocking banalities that were the sum of my life and yet couldn't possibly be of any interest to you, I did manage to see two different performances of Mahler's 9th Symphony in the space of a week. The first was at the Royal Festival Hall, the London Philharmonic conducted by Christoph Eschenbach, preceded by Lieder eines fahrenden Gesellen. Overall it was very good, although the sound was somewhat lacking in the hall - none of the crescendi ever actually made that much of an impact. Eschenbach handled the irony and grotesqueness of the two inner movements well, with the percussion in the Landler occasionally giving the impression of rimshots accentuating sick jokes, and the Rondo-Burlesque blasting along at a thoroughly sarcastic pace. Unfortunately however, I really didn't get the way Eschenbach handled the finale. The best recordings I've heard of the movement have always been determined, and in fact rather consistent in tempo; there always seems to be a sense of drive about them. But the way Eschenbach repeatedly brought the movement to a near halt, a near silent halt at that, meant that the performance required a blasting insistence from the three climaxes that was just not forthcoming, losing much of the movement's power in the process. And by the time the final pages arrived, it was almost as it had bottomed out too early, leaving Eschenbach a little bit lost in a sea of uncontrolled coughing, as we waited for his hands to drop into the silence.

Gergiev, at the Barbican with the LSO a week later was very different, if a little more conventional. The first half was Shostakovitch's Cello Concerto No.2, a piece I didn't know, but which was an inspired choice, with its sarcastic almost-disco moments inamongst the gloom complementing the Mahler's self-undermining nature excellently. For the Mahler, the sound was far better than at the Royal Festival Hall, the orchestra sounding far more full, the strings very much in the soft and silky mode, the climaxes packing real punch. But compared to the Eschenbach, the two ironic inner movements were played less for laughs and more for angularity, which I felt to be a flaw. Mostly this approach backfired, although a moment near the end of the Rondo-Burlesque - when Mahler gives us a melody on which the sugar has been laid so thickly it's almost sickening - came as such a shock out of the brutal rush Gergiev was in that myself and my companion both nearly burst into fits of laughter. For the finale, Gergiev played it exactly as it should be played, with the almost Beckettian insistence of the writing totally apparent, and the three major climaxes really leaving you exhausted. Eventually, after the final attempt of vitality to assert itself fails and the music drifts off towards nothingness, the quoted melody from the Kindertotenlieder in the last few bars made my hair stand on end, as it bloody well should do. Not exactly a ground breaking performance, but it's one of the finest works in all of music so if it's done well then there's really not much better to be had, period.

Mahler 9 Finale (excerpt) by entschwindet und vergeht
Afterwards, I made this arrangement of the first 18 bars of the finale. It's not very appropriate to the character of the music, but I felt compelled to do it, so there.
at 10:32 pm No comments: Responses:

Email ThisBlogThis!Share to TwitterShare to FacebookShare to Pinterest
About: Beckett, death, despair, Mahler, me me me, melancholy, Modernism, music, romanticism 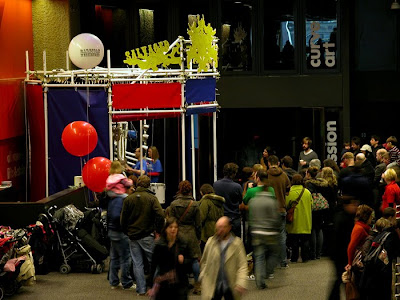 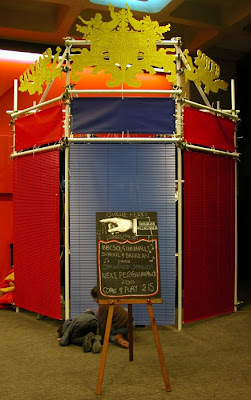 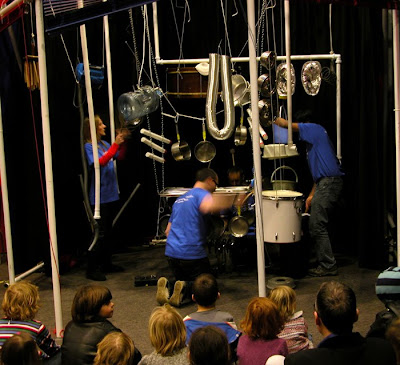 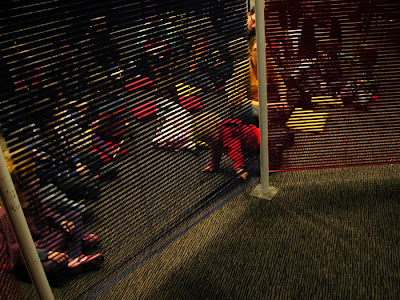 I guess it's been a long time.

Anyway, without wanting to get into the changing (read: receding) landscape of people wot write on the internet and so on, here are a few wee photos of the thing I did at the Barbican the other weekend. It's hardly spectacular, but the children all seemed to really enjoy it, which is the main thing at the end of the day. In fact the best feedback will have to have come from the child who poked his head into the space while we were setting up and said, eyes wide with awe: "WOW, IS THIS A DEN?"
at 10:25 pm 1 comment: Responses:

If you have young children and live in London, come down to the Barbican tomorrow or Sunday, because myself and two lovely friends have designed a big musical den as part of the Barbican's 'Weekender' programme, and it will be played by percussionists from the BBC Symphony Orchestra and the Guildhall.

There is a tiny flicker of light inside me that is not always already snuffed, and this weekend is a chance to see it.
at 12:53 am No comments: Responses:

'Be not solitary, be not idle.' - Burton, The Anatomy of Melancholy

'Habit is the ballast that chains the dog to his vomit.' - Beckett, Proust

Anywaaaaaay... here's some things to look at:

---
I'm currently collaboratively working on a thing as part of the next Barbican Weekender on the weekend of the 5th & 6th of March. The piece is called 'Salvaged Sound' and is an installation to be played by members of the BBC Symphony Orchestra and Guildhall musicians. If you read this blog and have young children, there are many much worse things that you could be doing this weekend!
---
Here is my Icon review of Patrik Schumacher's 'The Autopoiesis of Architecture'. I sometimes wonder if I'll ever get a chance to finish writing my guide/critique to his book, and of course whether or not I've just wasted my time worrying about it at all. Steve Parnell's review in the AJ was much much better than mine, although I am in broad agreement with him.
---
Speaking of the AJ, I had a review of 'Neo-Avant-Garde and Postmodernism in Britain' in there a couple of weeks ago. It's a really fascinating book, adding more to the Stirling and Brutalomo resurgence.
---
Carl reminded us of 'Vids' over on the amazing 90s blog.
--- 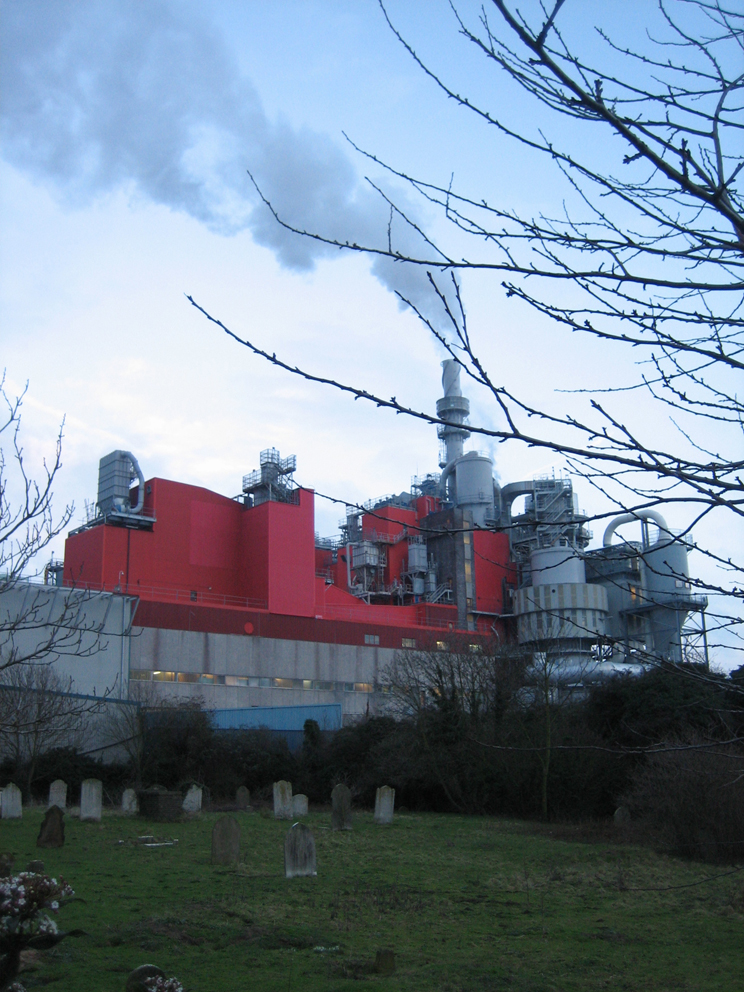 Some great stuff over on Fantastic Journal:
Digging out vintage books on London architecture...
And some fascinating photo essays, one of which provides the image above...
--- 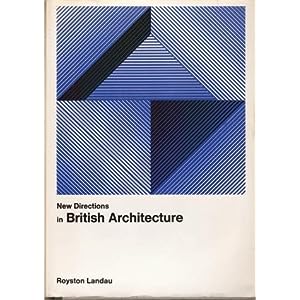 Anyone fancy a shot on 'Waiting for Godot : The Video Game'?
---
A Samuel Beckett documentary, which I haven't had a chance to look at myself. Maybe you can let me know if it's any good.
---
Right, I'm off to bed, but for what it's worth:

LONG LIVE THE NORTH AFRICAN REVOLUTION!
at 12:08 am 1 comment: Responses: