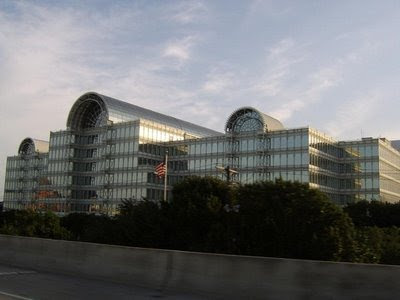 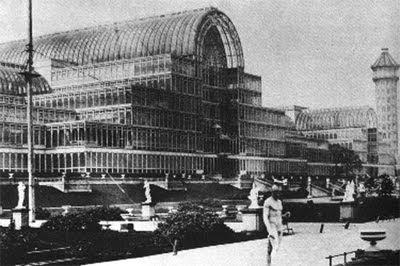 One of my main theses, if not my main thesis, is that the 19th century iron-and-glass building is even now one of the most significant phenomena in architectural culture. If you’ll allow me a cheap metaphor, their reflective surfaces act as prisms that have the potential to refract our understandings of modernity, technology, commerce, ideology, power, history, etc… They are not empty signifiers like the Ode to Joy, another problematically iconic 19th century cultural achievement, but they can be and have been seen in different ways at different times.

Regarding technology, the link between the Crystal Palace itself and Hi-Tech architecture is a strong one; there is a very powerful and settled image of the Victorian Engineer-Genius such as Paxton or Brunel as the forerunner of our giants of architecture, Foster, Rogers, Balmond, via people like Buckminster Fuller and so on; what at another point I would like to properly define as the ‘Solutionist’ narrative of twentieth century architecture. But even a figure like Brunel does not possess a clear identity when it comes to modernity; his futurism is simultaneously regarded with sickly nostalgia for the ‘Great-ness’ of Britain (sandwiched as he was between Winston Churchill and Diana Spencer in that horrifically vulgar 2002 BBC poll).

Another example of this strange forwards and backwards straining of modernity is the Infomart building in Dallas, Texas. Completed in 1985, slap bang in the middle of the most horrid phase of Pomo architecture, it is a pastiche of the Crystal Palace. Like much postmodern architecture it combines the cheapness of then-contemporary commercial construction techniques with ‘historic reference’, although in this case rather than generic historical signifiers like keystones or pediments there is actually only one source of reference. As the building is large, square planned and generic, this reference is achieved mostly through the detailing of the curtain wall along the façade, although it features a few small vaulted rooms and a single large atrium that comes complete with a replica of the Crystal Fountain from the CP (made by the same company, Barovier-Toso). The building certainly doesn’t achieve the dizzying internal vistas and rhythms of the original.

But how perfect an example of architecture as a self-legitimising activity! The Informart was built as the ‘world’s first successful technology community’, and is specifically filled with telecoms companies, IT, software companies and so on… Housing an industry that was still very young, and whose future significance was not at all guaranteed, the building uses the Crystal Palace in a ridiculously ideological way:

INFOMART opened in 1985 as a permanent trade center for the information technology industry. Covering 1.6 million square feet, the building was modeled after London’s Crystal Palace, the site of the first World’s Fair, the Great Exhibition of 1851. Like the Crystal Palace, INFOMART Dallas is a stunning landmark whose bold design and elegant seven-story atrium reflect the forward-thinking purpose for which the building was constructed. For this reason, England’s Parliament has declared INFOMART Dallas as the official successor Crystal Palace.

Now, quickly passing over the most obvious error (England doesn’t actually have a parliament, let alone one that would need to judge an ‘official’ successor to the CP), there is another significant fail; much as it is easy to understand the attempt at channelling (conjuring?) the historical power of the first ‘World’s Fair’ building, akin to digging up the bones of a giant so that one can attempt to stand on their shoulders, the Infomart building wasn’t modelled after the Great Exhibition at all. The multiple vaults are rather copies of the ill-fated, sprawling melancholy of the Sydenham Palace of 1854, a building which -despite being constructed from the same iron and glass as its earlier incarnation - was a much more complex and uncertain building than the shed of 1851. This has a historical echo in the fact that the Infomart was for a long time considered a failure, a “a huge silver and white elephant.”

There’s another level to the unintended significance of the Infomart building. It may well have been seen as pretty damn modern at the time, but this was only a couple of years after Beauborg & Lloyds, or Willis Faber Dumas and the HSBC building. The supposedly egalitarian transparency of British Hi-Tech was not yet the all-suitable architecture of choice for commerce that it would later become. In retrospect the Infomart building looks doubly dated- both explicitly historicist and also now deeply unfashionable, part of a stream of design that ran dry. That one of the first physical gestures of the new immaterial landscape of the digital age would be so awkward, so insecure, is perhaps apt.

“If Infomart is a cultural symbol at all, it surely represents high tech’s lack of self-confidence, its ambivalence about the present and the future, and its consequent neet to establish close ties to the past. Infomart’s intriguing façade thus remains merely a façade.” 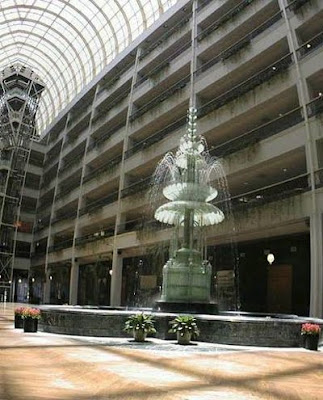 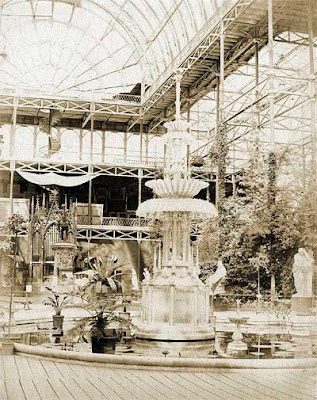