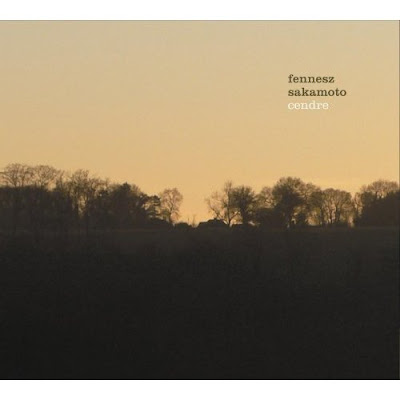 On Jon Wozencroft's typically excellent cover art for the (mildly disappointing) second fennesz/sakamoto collaboration 'cendre' there is something rather exciting. Barely visible on the front of the sleeve, running horizontally across the sky is a slight white line, faded, not present at all points, but there (albeit not visible in this image). One hardly notices it at first, it could easily be a scratch acquired in handling, prior to purchase, but an uncanny moment occurs upon opening - the line continues across the inside of the sleeve, in exactly the same position, across an entirely different image. Upon further examination this mark appears to be the area where ink is damaged when a piece of paper is folded, or perhaps it is just a miniscule photoshop subtraction, but either way, upon perception, a barrier springs up between you and the image. This second screen, the addition of another layer of distance from the image, makes the first distance, normally ignored, all the more apparent.

Could this not be described as a minimalist hauntology? Instead of the technological uncanny being the focus of the work, the object as it were, this tiny mark actually works as a point of minimal difference, where the phantasmal barrier between image and eye is given body, where the normal fiction of a direct connection between the image and its perception is no longer tenable.

In other words, unlike 'the caretaker', where the decay of the memory is almost complete, and only the tiniest trace of 'the object' remains, here we have the very opposite, the out-of-jointness of memory even at its most clear.
at 5:25 pm No comments:

"What is it, now, to chew carrots? Why this plural? Could there ever be more than one of them? Could this question even have meaning? Could one even speak of the chewing of a carrot, and if so how, why, to whom, with what onto-teleo-theological animus?"
- Eagleton 'haunts' the prose of Derrida, in Marxism without Marxism from Ghostly Demarcations.
at 4:30 pm No comments: