And this enemy has not ceased to be victorious.

I imagine that everybody who visits this blog is already aware of the impending closure of the entire philosophy department at Middlesex University, one of the only places you can study modern European philosophy in the UK.

My life has been thoroughly enriched by coming into contact with the amazing work of those who work there, have studied there or have been promoted and disseminated by the department.

It is, quite frankly, an example of the most unbelievably thuggish mindlessness, another example of the ongoing and thorough dismantling of anything and everything that higher education was ever supposed to represent. This is just one of what are likely to be a great many struggles in the near future, as the fallout from the crisis of speculation continues to destroy anything that made culture worthwhile in the first place - what's the point of an undead economy if the culture that is supposed to benefit is itself utterly spent, bankrupt?

Anyway; please go here for the facebook group & sign the petition here. IT, who became a doctor at Middlesex, has links to many of the responses to the situation.
at 12:48 am No comments:

Email ThisBlogThis!Share to TwitterShare to FacebookShare to Pinterest
About: despair, Philosophy, politics

A Necessary Ruin - Trailer from Evan Mather on Vimeo.

Two days ago I finished writing the draft manuscript of The Architecture of Failure. It's all about the iron & glass architecture of the early world exhibitions, abstract-ruins, architectural melancholy and the conceptual relationship of architecture to the technologies that make it possible.

Hopefully you'll be able to read it soon(ish), on zer0 books.

Meanwhile, the above video seems interesting. Richard Buckminster Fuller pops up in the AoF manuscript as an example of politically naïve genius; but we see here that even he wasn't immune to ruination, even if high-tech architecture tends more towards disappearance rather than decay.
at 12:39 am 2 comments:

Email ThisBlogThis!Share to TwitterShare to FacebookShare to Pinterest
About: architecture, buckminster fuller, failure, high-tech, the ruin

Stone on Stone [CLIP] from Rob Carter on Vimeo.

Now I don't normally find this sort of thing entertaining, but this really is fantastic; a sort of Monty Python attack upon Corbu's La Tourette - one half expects to see a giant foot descend upon the monks with a squishing noise. It's a return of the repressed, perhaps, where the thoroughly abstracted language of the monastery is infected with the 'truth' of its historical source language. I'm reminded of a quote, from where I can't remember, about how Gillespie Kidd & Coia's St Peter's Seminary represented a step beyond La Tourette for daring to re-imagine the programmatic aspects of religious seclusion; La Tourette doesn't really alter the arrangement of the monastery typology. 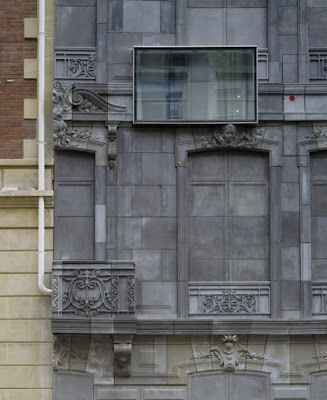 Aesthetically; this reminds me of the germs of neo-pomo that we see being built around us; take a look at Edouard Francois' Fouquet's Barriere' in Paris, with its cast concrete Haussman facade to see an example of this kind of hybrid; indeed, the transformation in this video is at its most fertile when it is at the in-between state of co-exisiting, fully realised mystic-brutalist and gothic detail. As well as this, there is the pseudo-baroque of the studios of Marcos & Marjan, a voluptuous style which is bound to get an opportunity to be built soon enough, seeing as they focus so heavily on small interiors. This oscillates between a Catholic corporeality and Islamic geometricism, the former of which is more unique at this time. Maybe also we should think about the clashes of language involved you sometimes see that I have already mentioned as a result of the 'rescued facade'. 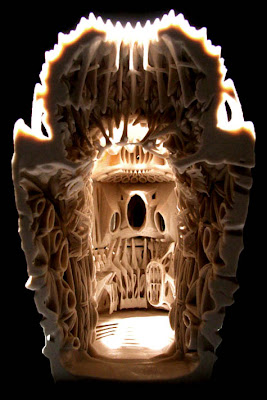 On the one hand this is old 'pomo'/'decon' territory, but is it possible to see opportunity here? One bad thing about pomo was that it looked cheap as shit; No.1 Poultry, or MI6 are both buildings in which the classical signifiers are totally spread out across a building of uniform modern cheapness; but would there be a genuine difference in this clash of two fully authentic registers; a certain bricolage of languages? Well; who knows. It's probably just mannerism at best, eclecticism more likely, but in lieu of the revolution it might be more interesting than the rubbish that constitutes 'the best' at the moment...
at 12:46 pm 1 comment:

I would dearly love to have a copy of this book; Kohlmaier & von Sartory's taxonomy of 'dusty fata morgana', Houses of Glass. It has been a great source for The Architecture of Failure, but I'd dearly love to be able to purchase a copy of my own; the only problem is that it has been out of print for a long time, and I don't really want to pay sixty sheets for it. But it really is a fantastic book, a sort of obsessive counterpart to the Arcades Project, collecting and comparing all the differing skeletal remains and spectral documents of these ferro-vitreous leviathans, saving for the archive utopian fragments of a collective dream.


Whereas stylistic architecture recapitulated history, the builders of the glasshouses had to conceive designs for contents that were ephemeral – plants or exhibitions. The trend toward the temporary was inherent in the plant houses and the exhibition buildings, and it expressed itself in the construction. Not suitable for industry and serving only for exhibitions or recreation, many of the glasshouses were left to decay, unappreciated, in less than a decade.
Of the buildings included in this catalogue, fewer than half are still in existence and many of these are threatened with demolition. In this respect, the catalogue is not only an inventory of the historically important glasshouses but also a chronicle of senseless destruction. 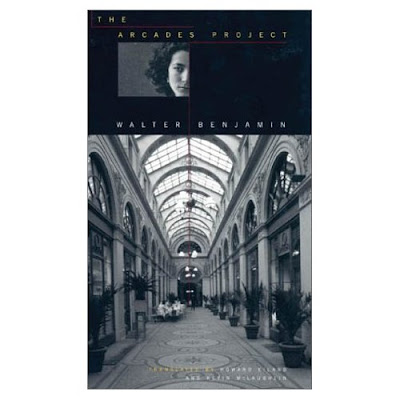 Does anybody know who the face on the cover of this edition of the Arcades Project belongs to?
On the inside cover it says it's a photograph of Benjamin c.1932, but that's blatantly not true, unless he had an alter ego called 'Waltraud'... I've always thought that the particularly passive expression on her face is wonderfully effective in preparing you for the dream-like state of the texts within, the fragmented face as the drifting gaze; passionate disinterest.

UPDATE! Thanks to Lang Rabbie, we have an answer! Its this:

Email ThisBlogThis!Share to TwitterShare to FacebookShare to Pinterest
About: Benjamin, transvestitism

More thoughts on the 'twisted thing'

Well, it's been a few days and it hasn't grown on me one bit.

On the one hand, after the initial rush of disgust, a more thoughtful mood seemed to prevail, with some contrarians thinking that the almost unanimous panning that it got meant that perhaps the 'arcelormittal orbit' ought to be reconsidered, and that perhaps it was quite dynamic after all, what with its hints of both Eiffel and Tatlin, and the 'Tower of Babel', apparently, which is surely not a good omen.

But, no. It's still ghastly. On the one hand the entire commissioning process for the object has been ghastly, with its vulgar politicians, its bastard of a financial backer, and its self-whoring 'geniuses', seen from left to right in the picture above, all contributing the kind of grinningly insincere statement that nobody even begins to pretend to believe, words that are nothing but cheap oil to the nu-language PR machinery. The fact that once again it's a piece of public art which signifies nothing but its own potential to be iconic is terrible, putting it firmly into the realms of what Jonathan Meades calls a 'sight-bite', those generically unique edifices which from an only slightly pessimistic angle resemble constructed death spasms of architectural culture. Couldn't we just have a massive sculpture of Lakshmi Mittal and be done with it?

On the other hand, it is going to be rather huge - 110m high is not a small building - it's the same size as Centre Point or the Barbican Towers, for the Londoners amongst you, thus it will be visible from a LOT of places. I suppose that it will be a spectacle to climb the tower, with the views, the wind, and the strange shapes looping around you, but anything that height would have the same effect upon the visitor; it's still only a third of the height of the Eiffel Tower.

This links into what in The Architecture of Failure I call the '1889 syndrome'; the twin structural achievements of the Galerie des Machines and the Eiffel Tower were so large that at that point engineering technology managed to surpass any of the spatial demands that had yet been made, or that yet could be made of it; that was the point that architecture revealed itself to be always pre-aestheticised, the point that any architectural dream of 'pure function' was, essentially, dashed.

In a way, the 'Arcelormittalorbit' is a symptom of this problem; and also a symptom of the problems of digital design in general. None of the images have even begun to express the scale of this object, because it is essentially scale-less.I don't think Anish Kapoor really has any idea how big it is; I suspect he's only ever seen it on the screen of a computer in the Arup office, I even suspect he's not contributed a great deal to the design at all; what we have is a doodle that has been turned into a digital shape which has then been translated into a buildable structure by some very advanced computer software. This is a process that is becoming more paradigmatic by the day, as the -supposed- vanguard of architecture resort more and more to the 'resolved shape' method of design; what the parametric revolution seems to be giving us is a terrible floundering around looking for appropriate forms to do justice to our new tools; cheap metaphors and weak symbolisms abound, 'strings of pearls', 'rolling hills', cheap nods to extinct local cultures, or more often than not, a napkin sketch. At the end of the day it's intellectually weak and more than a little depressing.

In fact, just to show you how easy it is, I've offered them a hand - this is my attempt to improve the structure, a redesign that took all of twenty minutes. Structurally it functions as a parabolic arch resting upon two geodesic domes (a homage to Buckminster Fuller), although the arch itself is made up of two separate structural objects; a web-truss and a circular sectioned box-truss, which meet at the viewing platform inside the 'bell-end'. I think it not only provides an iconic structure that we can all admire from anywhere around London, but it also wryly subverts, deconstructs, if you will, the priapic certainty of the conventional tower-structure. 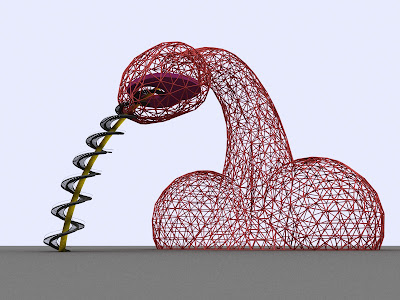 click on the above picture to enlarge.
(fnarr fnarr)
at 6:06 pm 3 comments: