I have created a new international anthem, to be played at all public events, everywhere, from now on.
at 1:07 am 1 comment:

Email ThisBlogThis!Share to TwitterShare to FacebookShare to Pinterest
About: apocalypse, music, Sarcasm

- All of the below comes from 'Man and Environment', a fascinating Pelican book, of which this edition was published in 1974. Yes, 1974! It contributes to the impression that the 1980s all the way up until 2008 were all just a procrastinator's diversion from what needed to be done in the world. Now, it looks more and more like we've missed the deadline completely, and will have just hope we don't get thrown out altogether. 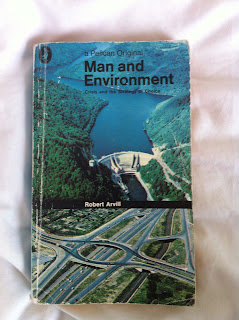 ... the one fact about the Future of which we can be certain is that it will be utterly fantastic.

Logically, the first prediction is that in the twenty-first century Europe will become a single unit for strategic planning and administration. All over the world regional 'blocs' are evolving and no faster than in Europe, not only in the economic field but also in the whole range of social activities. In a Europe planned as a physical entity, the Scandinavian coastline, much of Scotland, the Black Forest, and the Alps and many similar areas would receive priority for conservation and enhancement.
Perhaps most of England and Belgium would be accepted as primarily industrial; possibly southern Sweden would be the location of half a dozen new cities, each of a million population taken from the overcrowded areas of Europe. The planning of six new cities would call for new patterns of thinking, for no country in the Western world has so far attempted anything on this scale. Development for six million means deliberately setting out to create a new environment for more people than at present live in the whole of Scotland.
With the development of techniques like atomic blasting, vastly more nuclear power, and underground sources of oil and gas, it should be possible to create landscapes on a European scale. Resources could be developed in a vast and excitingly imaginative way - agricultural zones could be related to the value over centuries of the best soils and climatic conditions, fish farmed in barrages created for water supply, and hydro-electric schemes combined with new motorways.
More knowledge of the environment should lead to measures for elimination of elements like bronchitis, which are associated with particular environmental conditions. Great scope exists for the detection and control of illnesses related to the mineral and other content of soils. Biogeochemistry has already found some areas which are conducive to cancer or heart problems. Preliminary indications relate these to a wide range of environmental factos, including soil. Perhaps planning will exclude certain activities or uses from such areas or require the dangerous conditions to be remedied before development takes place.
Computerized inventory and processing of all resource information will have become an accepted feature of man's relationship to his environment. Research will increase in importance; its role in decision-making may be extended to promote the examination of basic assumptions and personal prejudices. Decisions should thus be based more on facts and known preferences and less on vague intuition. Although the imponderables will always count in respect of physical issues, many could be eliminated in the twenty-first century. Design-awareness centres will be an accepted 'institutionalized' part of the educational process as the public-health values of a high quality environment are accepted.
As more is learned about the diversity and quality of intelligence and man's potential for increasing it, so it may be expected that environmental conditions will be improved to enhance this most vital of all resources. The population pressure itself becomes the source of new qualities and quantities of human ability, provided that its growth is related to the development of man's intellect and his resource productivity, and that it is always borne in mind that he may have to occupy this planet for millions of years.
But optimism is denied by the assessments and forecasts made for the Club of Rome in its project on the predicament of mankind. This stresses the critical world situation arising from the many complex interactions between industrialization and depletion of natural resources, and between populations and food shortage, pollution, war, stress and disease. It forecasts a marked deterioration in material standards of living of western nations and contends that many of the proposed remedies may be self defeating. The Club seeks to identify and implement policies which will enable the world to make an orderly transition from a growth-based economy to an ecological equilibrium.
These aims received strong support in January 1972, when the British magazine The Ecologist, vol. 2, no. 1, launched A Blueprint for Survival. This proposed the formation of a movement for survival based on a new philosophy of life in harmony with the environment. It prescribed a comprehensive programme for the long-term stabilization of society based upon self-regulating systems and self-supporting communities.
Albert Schweitzer, too, was pessimistic. He said: 'Man has lost the capacity to foresee and forestall. He will end by destroying the earth.'
How then to conclude? In such a vast field and with so much at stake, it is perhaps most important to emphasize man's responsibility, and to stress the challenge he faces now.