There was one particular moment in Haneke's The Seventh Continent, watched at the incomparable Kino Fist on Sunday, that strikes the viewer immensely. It occurs minutes from the end, in the bathroom, as the mother of the family swallows down all her sleeping pills. She swallows them with difficulty, fills up her glass, drinks some water to make sure they stay down, then looks at herself in the mirror, turns and leaves, the deed is done. As she walks out of the bathroom, however, she switches off the light.

Now, as the film itself dwells interminably on the mundanity of the objects and habits in the protagonists' lives, it could be seen that this gesture represents just the persistence of habit to the end, its inescapability. This would go against, say, the Proustian system whereby suffering and habit are in opposition, never concurrent. Against this, we could say that the ennui that has driven her to this point has become total, that the objects in her life may have been destroyed but the habits that are the extension and complement to these objects can only be destroyed with her death.

But that is not, I think, the real power of that gesture. I am reminded of Derrida's line on death : "chaque fois unique, la fin du monde"; Death is the end of the world, unique each time. Essentially, once the pills are down her throat, she is dead, walking dead, a zombie. To switch this light off requires her to make a massive investment in the persistence of the world outside of her being, so much so that one wonders if it could be read as an utterly reduced grain, the tiniest fragment of universal behaviour.

Perhaps it is just drive, unsatisfied even by death itself, perhaps it represents that even at the ultimate extreme there is no 'outside' to escape to, but the gesture worked magnificently as a cinematic punctum, pricking me; a subject who, just like everybody else is always already dead.
at 11:14 am No comments:

with apologies to C.D. 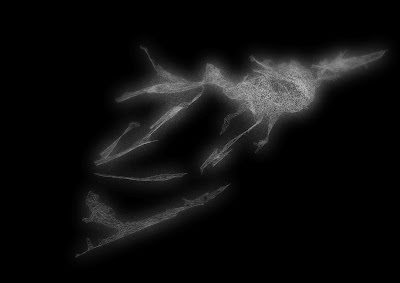 A new game, for two players.
1) decide to visit an Architectural Exhibition (student or otherwise).
2) before entering, draw lots to decide who takes the first turn.
3) take turns to select polysyllabic, vaguely theoretical words one would expect to see in the exhibition.

The words used may vary from exhibition to exhibition, but will generally be along the lines of:
parametric, reflexive, responsive, deforming, pataphysical, intensive, rhizomatic, algorithmic, generative, smooth, &c.

4) first person to collect all their words gets taken out for dinner afterwards...
at 3:31 pm No comments: