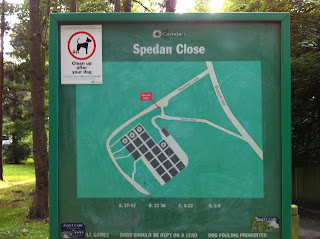 Another brief wander was gone on.  This one was certainly not a drift, as it was guided by a certain Mr. Pevsner, whose guide to North London (not yet updated in the latest round of re-edits) was given to me by my father recently. Thus it was an opportunity to head up to a part of London (namely Hampstead) that I had spent very little time in at all, and deliberately see buildings, in this case modernist houses that I'll never ever ever have even the slightest glimmer of a fragment of a smithereen of a fleck of a hope of living in. 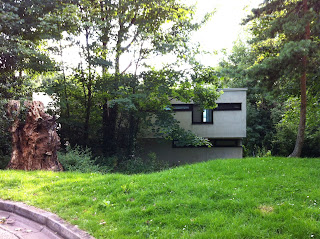 But to be honest, I simple wasn't prepared for the strangeness of the experience of the architectural experience of visiting one of the lesser known examples of the Camden avant-garde of the 1970s, the Branch Hill Estate, by the great Scottish Corbusian architects Benson and Forsyth. 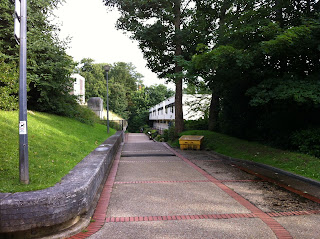 It's certainly not easily found, the Branch Hill estate. Based upon the description of the perambulation from Pevsner, we had to descend from a pond (once used to wet the throats of tired horses) at the very top of the hill, passing through a meadow after the pavement vanished, and then deducing that the little hidden driveway beside a terrace was actually the route down. Then, nestled into hillside of pronounced slope, surrounded on all four sides by a thickness of trees, the tell-tale white render and black window frames became visible, the signature details of a Camden Council brutalist estate. 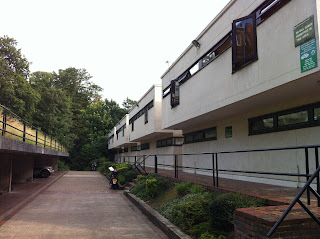 But I have to say that this was the very weirdest one I have ever encountered. Neave Brown on Alexandra Road is a fantastic abstraction of the density and massing of your typical 19th century estate housing, while Vincent Tabori's effort near Highgate Cemetery plays wonderful games with garden landscapes. But while those might both be formally more exciting, I've never encountered an estate arranged in such a strange fashion as this one. 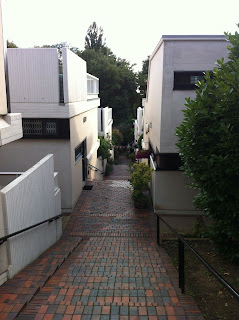 Even Benson & Forsyth's work over at Maiden Lane (which like no other place in London allows you to imagine that you are in a city in continental Europe), is nowhere near as ridiculously set out as this. 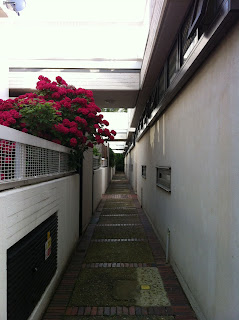 Because the Branch Hill Estate is arranged as a grid, a ruthless grid. Take a look at the map from the first image; apart from perhaps the Heygate Estate map, with its long black streaks, this is perhaps the most unique of all the layouts of housing estates in London. Each of the 21 blocks on the plot takes up what is basically a square. These are divided into 2 units each, meaning that this is a block of semi-detached houses, stretched out into a quilt, a mat, rather than a terrace. Each house is entered from the side, and linked in one direction by staircases, and then in the other direction by straight walkways. 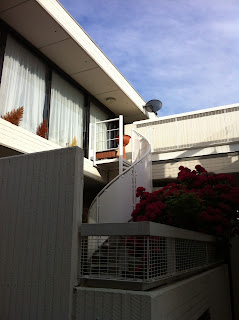 Flats are organised with 2 bedrooms at the lower level, with a large open plan kitchen/dining space, a living area and one more bedroom above. The lower bedrooms have a courtyard, albeit a small one, and most of these were highly verdant. But look at the images above; there are bridges that run across from the upper floor of each building... 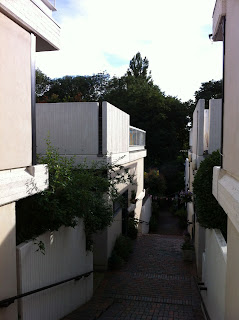 ... which lead onto the roof of the one below. So each house has a roof terrace which is set above the house below it on the slope. I, for one, think that this is a lovely gesture of communal spirit; assuming that the heavy concrete frame construction is adequate for sound insulation (and it should be, considering there are gardens placed above), then there's something incredibly touching about an estate of such apparent gridded rigidity actually harbouring a complex and ambiguous differentiation of property boundaries. 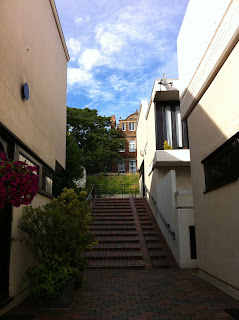 At the top of the hill there you can see the Branch Hill Lodge, which was an existing large house on the hill. This was bought by the council in 1965, and is now an old people's home. The grounds are what became the site of the council housing beneath. 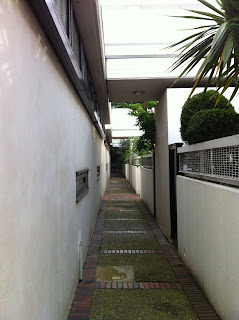 There's something hilariously incongruous about the design of the estate; the strange mediterranean hill-top impressions, the brick staircases, the high-grade concrete, the white paint everywhere, it's almost a joke to stumble upon this in such a seemingly Ennnnnnglish part of London. 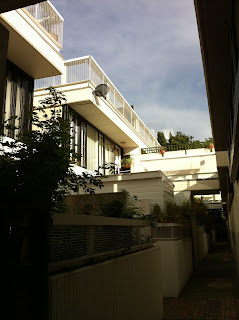 An abstraction, not of some Georgian or Victorian typology as found elsewhere in Camden, but a Sicilian hill village, misinterpreted and translated into a leafy suburb. But there is something else about the estate, another slightly unsettling sensation, that is palpable as one walks around. If you believe people who claim that bad design can make you vulnerable to muggings, that a certain layout of buildings and open space necessarily lead to failed neighbourhoods (or vice versa, certain layouts and arrangements necessarily lead to vital, thriving neighbourhoods), and this includes supposed empiricists like Space Syntax, as well as anecdotalists like Jane Jacobs, then Branch Hill Estate just makes no sense at all. It should, by all accounts, be a stabber's paradise. Its narrow lanes, with blind corners every few meters and a plethora of possible escape routes for a ne'er-do-well, should be teeming with junkies and gangs. If you believe that spatial environment is everything, then this block should be the worst in the world; it breaks every single rule. 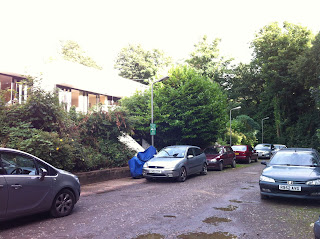 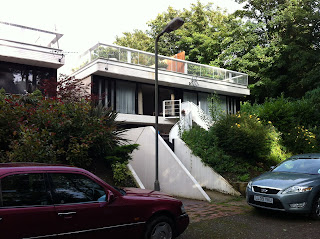 But no, it's just lovely. Quiet as a mouse (although not completely, there were a few people passing by as we walked through), and with what one can see of the interiors appearing to be as seductive a living space as one can envisage, there isn't even the slightest hint that this place is anything other than a wonderful little secret village. 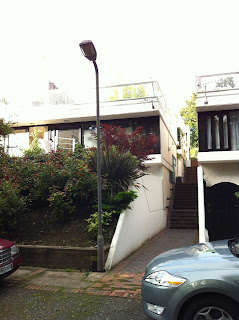 But, to slightly expand; there are probably a few counter-arguments that could be made to explain why this estate isn't a dump. On the one hand, it's in Hampstead, for God's sake. I've no idea what the figures are, but I'd be willing to bet that there may well not be a single unit in the Branch Hill Estate that remains under control of the local authority: that the right-to-buy open-plan modernist houses in Hampstead was too good an opportunity to ever miss. Wealthy neighbourhoods, by and large, have lower crime rates, whether the houses that make them up be made of concrete or of brick. 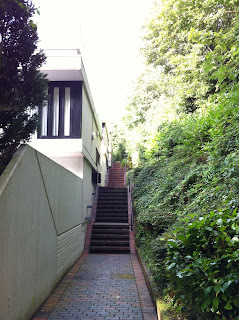 On the other hand, it's isolated. Being so very very cut off from the outside means that there's probably almost no through traffic, whether vehicular or pedestrian. This I have mixed feelings about; this estate may be high density and it may be unashamedly modern, but in urbanistic terms it probably has most in common with your suburban cul-de-sac. It may be hypocritical, but I'm tempted to look the other way on this one. 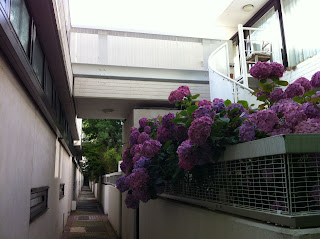 Now I'm perfectly happy to accept that were this estate to have been built in a down-on-its-luck area in South London in the 1970s, then its fate may well have been very different (Maiden Lane was pretty notorious, from what I have heard). But the only thing that this proves is the tautological point that nice areas tend to be nice, no matter what the style of their buildings. Let us not throw the proverbial babies out with the bathwater here, but at the end of the day, the social performance of a neighbourhood is mostly due to its economic fortunes. Ignore these in favour of some panacea based on how many small shops there are or how few blind corners there are to hide behind, and you're basically trying to sell us snake oil. 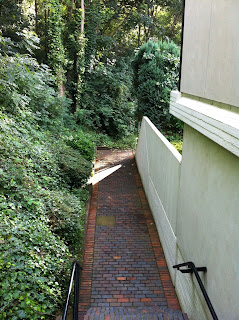 (Just too lush, too gorgeous!) 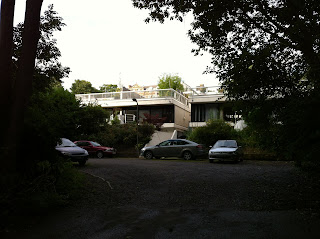 But perhaps I should make a further economic point here, one that concerns the project for modernist housing in general. We have to admit that the Branch Hill Estate was a financial mess during construction; problems on site and the complicated nature of the design meant that the budget was subject to massive over-runs. A familiar story, especially for Camden Council estates, but with Branch Hill and others now listed buildings, with people like me traipsing around staring at them hungrily, we must ask what the significance of this is. When you look at the mass-housing buildings from the heroic post-war period, one rule of thumb seems to be glaringly obvious; the buildings that have survived to the present day were frequently the ones with bespoke designs, while those most swiftly removed are frequently the system-built, pre-fab panel construction buildings. Obviously there are exceptions to this (in Glasgow, Basil Spence's Hutchesontown flats are long demolished but the Red Road Flats are only just going down), but a general rule seems to be that if you build it properly, if you spend the money on it in the first place, then it's worth keeping. Indeed; this is the same for every generation of building; we love our Georgian terraces because the slums were pulled down, we love our Glasgow tenements because the single-ends were torn down. Now; we love our Balfron Tower at least partly because the Freemasons Estate was torn down.

Does this mean that a lesson to be drawn is that architects should attempt to spend as much as they possibly can, that budgets are irrelevant to the task at hand? Of course not. Architects need no extra help in rendering themselves redundant to the modern construction industry. But perhaps the lesson here is that there might just be a secondary economic effect involved in successful estates, that it is not quite enough to have wealthy residents, but that if it's designed thoughtfully, and built properly, then it will be worth it in the long run. 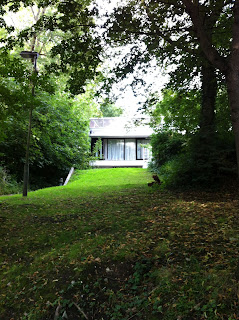 And to tell you the truth, it was somewhat agonising walking around the Branch Hill Estate, with its beautiful woodland, its seclusion, its large open interiors, its massive roof terraces, its large windows and narrow alleys, its all important sense of adventure, experiment and of course modernity. 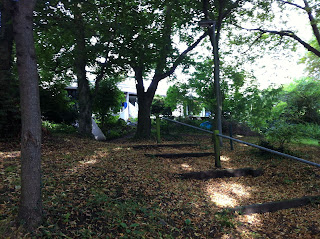 Because one had to drift away...

A double dose of me talking bolognese. The video above is me giving a lecture in Zagreb, about a year and a half ago. It is regarding monuments and olympic architecture, with a special focus on (you've guessed it) the ArseOrbit. Below is a little interview they conducted with me the next day.

Email ThisBlogThis!Share to TwitterShare to FacebookShare to Pinterest
About: architecture, art, capitalism, ideology, London, me me me, Olympics, politics, public art, the Orbit 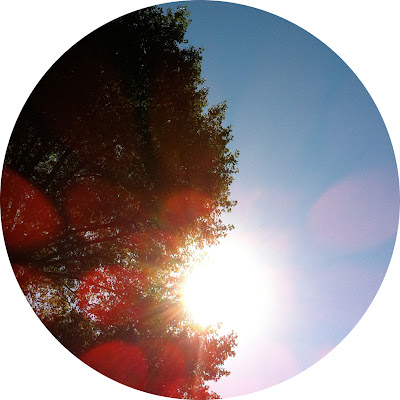 Another prélude; this time the slinky and oceanic No.21.

This is the ninth I've 'finished'. I think the transcriptions themselves are alright, but obviously my technique isn't really up to scratch for some of them, and it's doubtful whether any of the super-difficult ones (no.5, no8, no.16 (!!!), no.24) will ever be possible for me to play. I'll keep going though, see how far I can get.

Hope these are enjoyable in some way.
at 11:43 am No comments:

Email ThisBlogThis!Share to TwitterShare to FacebookShare to Pinterest
About: Chopin, guitar, me me me, music, romanticism
Newer Posts Older Posts Home
Subscribe to: Posts (Atom)