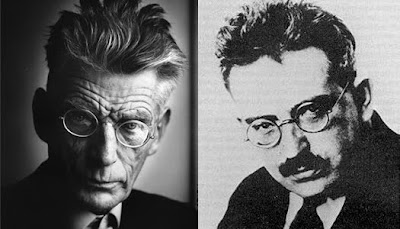 Here's a funny thing I noticed the the other day.
By now you should all be aware of this:

Hence, the light that fell from above, through the panes between the iron supports, was dirty and sad.

But what about this then eh?

The Zwinger [...] is altogether lovely, with such sudden sad passages [arcades] ...

There are sad passages, the arcades leading up to the entrance on the garden side.

Email ThisBlogThis!Share to TwitterShare to FacebookShare to Pinterest
About: arcades, Beckett, Benjamin, melancholy

In Praise of the Space Frame!

Is there any structure that quite shouts '1970s' more than the space frame? Under the influence of Rayner Banham and Buckminster Fuller, radical architects all over the UK suddenly turned away from concrete towards the joys of ball-joints and lattice work. lightweight and efficient, these structures also look dirt-cheap, and are magnets for dust and grime. No other structure manages to look quite so dowdy as the space frame. It's almost as if they were designed to evoke Benjamin's 'dirty and sad' reaction to iron & glass.

Essentially what killed the space frame as a vehicle for architectural expression was British High-Tech. Rather than the willful ugliness of Price or some of the Zoom architects, making a virtue of the rudimentary, Rogers & Foster fetishised the detail, and led us up to the current commercial glass aesthetic that we all know and hate. But wait! What's this?

Is that really Zaha Hadid resurrecting the space frame? Is she subverting the patronage of her Azerbaijani clients by delivering them a dusty, dreary, dream-like interpretation of the old iron & glass palaces of melancholy?

Of course not. It's going to be entirely clad in an unspecific shiny white material, as ever.

At this point I should state that I've not read Jane Jacobs' The Death and Life of Great American Cities. A few months ago there was a sudden outburst of Jacobs-related chat from the local architectural cognoscenti, and there are two excellent, excellent essays relating to her work from Kosmograd and from Spillway, in case you wanted to go over some of the ideas that contemporary critics have about her, rather than her nu-urbanist zealot followers. Kosmograd discusses how her notion of the city cannot possibly make any sense when confronted with the shocking urbanism of the Foxconn factory city in China, and also discusses how the application of ideas from 'death and life' has lead to 'bo-ho theme parks' (and Jesus, if ever you needed a description of where I live, it's that). From there we are only a converted loft away from Richard Florida, and all the seething shit that goes along with that kind of attitude to the city.
Spillway's piece discusses the new-urbanists' aversion to urbanism, their reactionary love of the qualities of the village, and includes the following:

"All cities need sublimity, a touch of holy terror, a defiance of human scale that asserts connection to the greater urban whole."

This cuts to the heart of the matter, although with Will's permission I might read it slightly differently. As far as I can see, at least a significant part of the desire that certain among us express for an urban landscape of sublimity is not just that it represents an egalitarian and more just future of collective living, but also that it represents a desire for everyday life to be artistic, furthermore, for everyday life to be avant-garde. 'To see one's self in a romance' as Keiller recounts, but perhaps the desire for the sublime modernist urban landscape is the desire to live, as it were, dodecaphonically...

...which brings me to this. The Cooper Union school in New York have put on an exhibition of the Robert Moses scheme that got Jacobs so riled up in the first place, the Lower Manhattan Expressway, as visualised at the time by Paul Rudolph, American brutalist extraordinaire. First, a few caveats: it is of course a Good. Thing. that this redevelopment never took place. And of course what would have been built would in no way have resembled the vision as conjured up by Rudolph. But my god! Just look at it! Surely this is one of the great candidates for urban sublimity...

I often imagine what it would be like if the political and economic situation of the world had panned out differently, if there had been no oil crisis, perhaps, or if the will had been there to continue pushing the megastructural experiments to greater heights and complexities. What if the Archigram project had taken off, and a full section of a plug-in city had been built? What if, to maybe drift close to 'and what will be left of them', the 1970s had not ended up in the 1980s, but had stretched out for another 30 years? What if instead of a right-wing reaction there had been a continuous development of certain modernist tendencies? Would there be any difference to life patterns if you lived in a pod house that hadn't been moved in a generation, and the cranes that were designed to drag it around had seized up long ago, the promised nomadism gradually encrusting into sedentary failure? Would there be a qualitative difference to your melancholy if you happened to live in the very future that is so conspicuously absent from our present?
at 9:57 pm 2 comments:

Here's a few things that I have been listening to lately. You might enjoy them too.
Marcus Fjellstrom
the disjointed by miasmah
This guy is an excellent composer of original haunted compositions.

Holy Other 'Yr Love' from FAMILY on Vimeo.

Some haunted disco. This, to me, feels like a cross between Decasia and a Burial record.


A little recording I made recently, with some shockingly anachronistic rubato.

The Fall - Hit the North

This has been a recent favourite after hours in our flat.

Fennesz - Before I Leave

An old favourite of mine.

Oh! This is so unbelievably lush.

This is what the 'hip cats' are listening to. Personally I reckon this is the only really good track off the album. Disregarding all else, I like the histrionic quality it has.

Another pinnacle performance, this is most notable for its very slow tempo.

This is an ultimately futile attempt to cheer up.
at 5:58 pm No comments: 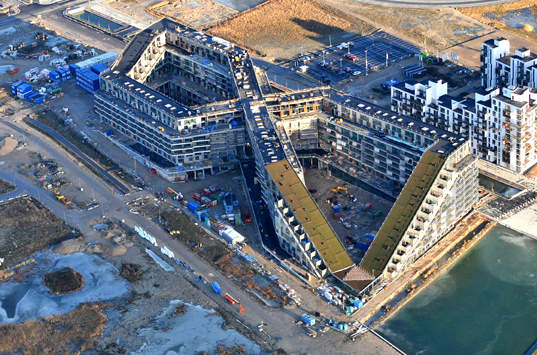 Nothing much to report, apart from the accelerating downward motion of what Laurie Penny aptly calls 'kamikaze capitalism'. I for one don't really see how we can't be in line for the most ugly of outcomes, considering not only the fact that organised labour is in disarray, but also that we've got an almost 'accelerationist' government in charge. Say what you like about these vicious scum, but they're just the most avant-garde ticket in town.

You may know that I'm 'architecture correspondent' at Icon magazine. This month there's more of my words than usual: There's a short feature on Ball-Nogues, who are primarily installation designers out in California. They're affiliated with Sci-Arc, and I suppose that what they do is exemplary digital architecture, in the sense that it's humorous, playful, and perhaps most importantly , it's clever without being overwrought. There's also a larger feature about BIG's '8 House', a rather massive 21st century version of a streets-in-the-sky megastructure. Although Bjarke Ingels himself was (perhaps understandably) quite evasive about having his work compared to something like Park Hill or Robin Hood Gardens, the over-arching concern is remarkably similar; the introduction of traditional (or at least regular) patterns of street life into much larger structures and arrangements.

The day trip to Copenhagen was certainly a somewhat depressing one, but basically for reasons of London's continuing malady than anything else. It really is beautiful, all rugged Scandinavian civic architecture (the old stock exchange (pictured) being a particular highlight), the seemingly effortless modernism, the water everywhere, the obviously slight wealth discrepancies compared to the UK, combined with that old cliche of relaxed and healthy looking people cycling everywhere. BIG have a lovely office, even if it's clear that they're as stuffed with over-stretched interns as anywhere in less relaxed parts of the world, but they have a lovely kitchen. Even Ørestad, the brand-new neighbourhood built to the South of Copenhagen, which is still mostly credit-crunched, even this place had a sense of insouciance and life to it. Add to this the accidental stumbling upon an iron and glass winter garden, the sheer thrill of a nearly deserted airport at the end of the day (bringing to mind Mirabele, that great white elephant) and the pleasures of making the acquaintance of a charming fellow traveller, and it was enough of a pleasurable experience to put one into a really foul mood upon return.

BLOGS
Carl at the Impostume has started / is part of a new group blog abut the 70s, which is thus far excellent. There was a recent post about growth and decline, and about how the 70s prefigured much of what we've been hearing about ecological catastrophe in the last 10 years. The following passage is utterly fascinating, and worth mulling over:

Because of course, the end of growth, and consequent decline, doesn’t need to lead to starvation, anarchy, totalitarianism or genocide. Between a techno-grandiose future of plenty and the apocalypse, there lies a "third way" - decade after decade, century after century, of drab, dilapidated crapness; a distended Seventies stretching over the horizon, where it may only give way to a similarly distended Fifties, and then a Thirties and so on. This is the future most unacceptable to the Western mind, but alas the one it appears most likely to encounter.

Found Objects continues to be excellent, and I was very flattered to see something wot I did pop up on the site. Thanks, (mostly) unknown hauntologists!

I wrote something about Cory Arcangel before, where I noted his ability to tease out the utterly abject side of internet culture. Well, he now has a blog dedicated entirely to 'sorry I haven't posted in a while' blog posts. It's hilarious and abject, which is a delicious combination.

I've seen Patrick Keiller's new film, 'Robinson in Ruins'. I'm due to write a review of it, but I'll most likely write something on here as well, perhaps at length. It's going to be abject.

TALKS AND WALKS
E&V is due to be doing a bunch of walks and talks in the next couple of months; I'll let you know what happens.