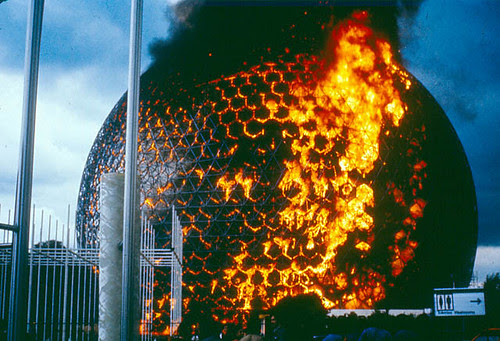 Here if I may I'd like to make a little announcement. As of the end of work today, the 29th of August 2013, I will be a full time writer. For the next few months at least I will be working on a new project for Verso; entitled 'Last Futures', it's a study of technology and nature in post-war architectural avant-gardes. In it I will be telling the story of the last time that there was any real attempt made to work towards a plausible architectural future, in the late sixties and early seventies. It was a strange period when high-technology and first-wave environmentalism were prominently discussed, before both were swept aside by the rise of neoliberalism. Now from the current age it appears tragic how so many of our most urgent crises were already under discussion back then, only to be kept off the agenda for a generation until we're now at a point where the situation already appears to be too late to save.

Last Futures will cut through the standard architectural histories of the period, which portray much of the experimental architecture of the time to be either hopelessly naive or impotently critical, and will demonstrate that many of the ideas and proposals of the time were more-or-less rational extensions of where things were heading at that point. I'll focus not just on paper projects, speculations and manifestos but on the more bizarrely quotidian examples of these ideas, to further stress the concreteness of these lost directions. In so doing, I hope to further develop ideas from The Architecture of Failure (which you can still buy) which searched for a synthesis between romantic and modernist concepts of architecture, and how important this task might actually be for us. Expect cybernetics, drop outs, hippies, mass-housing, biospheres, space frames, situationists, countercultures, technocrats, environmentalists, dialectics, disasters and defeats...

Thing is though; it's now been half a decade since I finished my post-grad, and well over three years since I submitted the manuscript for my first book. In the intervening time a lot has happened, but it also feels as though time has stood completely still, at least compared to how fast it moved as I went through education. I basically fell into a day job as I was finishing off the manuscript, and it has taken this long for me just to be in the position to take the opportunity to write another one. In the meantime I've written hundreds of thousands of words, for Icon and for all manner of other publications, I've interviewed many of the biggest names in architecture, I've visited new buildings all over the place, I've lectured across Europe, I've appeared in national media, I've built (with friends) various installations and small projects, and all the while I was working four days a week in an office. Add to that the slow background work of learning a completely different method of playing music, some really rather miserable experiences of various kinds along the way, and finally a period of being gravely ill and needless to say, I'm pretty exhausted.

Obviously one should never play the what-if game, but it's difficult to know how working at a pretty intense job while simultaneously trying to fit some kind of career as a writer around that would stand up, compared to some of the other options that were available to a post-grad architect floundering around in the maelstrom immediately after the crash five years ago. Perhaps, like some, he ought to have fled the country to doss about in Berlin, in which case god only knows what he'd be doing now, or maybe he should have dived straight into a PhD, which would most likely have had the word 'haunting' in the title, and would now be complete, giving him the rapidly evaporating academic world to thrash around in. Either way it certainly feels that in the last few years developing intellectually or critically has been almost impossible with the demands consistently made on my time. But never mind; these are worthless counterfactuals, of course I'm not doing too badly after all, and as everybody knows, "This life is a hospital where every patient is possessed with the desire to change beds."

So for now I'll be trying to knuckle down and get stuck into this new book, and hopefully there will be opportunities to do some interesting projects in the meantime. If you're around say hello, and let's see if something good can happen even in these worsening times.