Out, Out, Damn Spot!

Criticism as a Substitute for Nostalgia 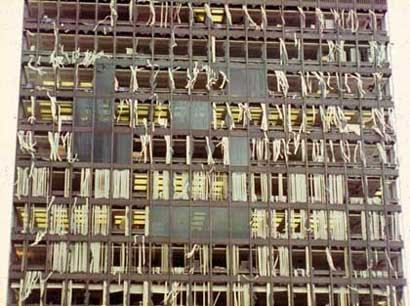 Appropriately enough, in amongst all this talk of nostalgia, and the palpably terrified condescension of self-styled gatekeepers pouring forth on the most imbecilic notions of ‘the Future’, there was a rare, rare, screening of Patrick Keiller’s quasi-documentary ‘The Dilapidated Dwelling’ at Birkbeck the other night.

‘The Dilapidated Dwelling’ is jokingly referred to as Keiller’s ‘New Labour’ film, but for good reason. One of the most memorable themes of the two ‘Robinson’ films is the political despair that runs through them, as the post-Thatcher Tory government slowly grinds to a halt; in London (1992), John Major’s election victory is watched from the shadows, Robinson spitting out invective, decrying the English middle classes who voted Tory “because in their miserable hearts they still believed that it was in their interests to do so”. By the time Robinson in Space (1997) was made, things were changing, signs of Tory defeat are apparent, and Tony Blair’s name makes a cameo on a plaque on the outside of a travel lodge, a pertinent ghost of the future, but his time had not yet come. Bearing this in mind, it is only natural that a film commissioned soon after the election of 1997 might have a different political tone to it, the despondency taking a back seat to something more open to possibility, and although critical, the film is not despairing.

The film is not a ‘Robinson’ film, although it shares certain aspects of method with them. The camera is still mostly stationary, and the narrator is invisible (although this time voiced by Tilda Swinton), but the major difference is that it is a documentary; an experimental one, true, but a television documentary, with interviews, advert breaks and archive footage interspersed with the quasi-narrative elements. Keiller himself seems somewhat unhappy with the result, explaining to us the pressure he was put under to make a ‘Robinson’-esque film, rather than a purely didactic work, but it does not suffer unduly as a result. All three films are structured around single problems; London deals with ‘the problem of London’, the answer being that it is the first city to have disappeared; Robinson in Space poses ‘the problem of England’, coming to the conclusion, brilliantly stated by Keiller at the screening, that ‘British capitalism works, but is horrible’, and in the case of ‘the Dilapidated Dwelling’, ‘why does the production of housing never get modernised?’, a more specific and, perhaps, a more academic problem than the first two.

The narrator travels around the UK interviewing various luminaries, including Martin Pawley, James Dyson, Doreen Massey and Cedric Price, with whose help she attempts to understand why Britain has the oldest and most run down housing stock in the advanced capitalist world, and why the housing economy produces so slowly and in such an outmoded fashion compared with other consumable objects. Keiller shows us footage of Bucky Fuller, Archigram and Constant Nieuwenhuys, representing avant garde approaches to the question of housing, and he visits faux-villages, Richard Rogers houses, prefabs and (surprisingly briefly) the architecture of Goldfinger and Neave Brown. Pawley answers the question of housing quickly and succinctly; using the remarkable and prescient metaphor of a bank note; an object made from the most banal of materials, and yet encrusted in detail; its symbolic value graphically reinforced with ideologically loaded imagery. What is the point of accelerating and modernising the production of houses when they are the locus of so many of our desires for permanence, the physical manifestation of much of our shadowy, spectral wealth (and even more ideologically, the place where our only valuable social institution (the family) resides)? It would not suit either the providers of houses, nor the consumers of them.

Keiller’s investigation often returns to questions of nomadic and sedentary lifestyles, with the former being associated with radicality and modernity (Massey suggests that the housing world will not change unless domesticity is revolutionised) and the latter with oppression and reaction. This argument is all very situationist, Constant’s New Babylon being a perfect example, but I’m unconvinced by it, perhaps partly because of the demeaning of the concept of nomadism over the last decades, becoming as much a signifier of the contemporary international jet-set bourgeoisie or the insecurity of work as the urban radical, uncovering the beach beneath the stones (be careful what you demand of capitalism, for it may grant your wish, but never in the way it was asked, Virno is good on this). Having said that, Keiller successfully manages to refrain from obvious politico-aesthetic judgements; this is not a polemic for the egalitarian value of fair-faced concrete, in fact it is disparaging of attempts to revolutionise domestic architecture with ‘wet’ construction. What is dealt with strongly is the economic structures and systems of the housing market, and it is this that sets Keiller the documentarian apart from Jonathan Meades; ‘the Dilapidated Dwelling’ covers territory that Meades has often dealt with, such as the origins of the reactionary traditionalist aesthetic in the socialism of William Morris and the garden city movement, but of these two idiosyncratic critics, Keiller is the one more prone to take on the numbers of a situation.

One thing that Keiller appears to approve of in this film is the functionalism of the figures he draws from. Throughout the film, ‘modernisation’ seems to stand for the kind of technological modernity exemplified by Bucky Fuller, or Archigram, a notion of progress whereby aristocratic technologists will identify the material and functional problem, solve it, and thus the problem will no longer exist. Modern architecture is plagued by this ‘Solutionism’, a wilful simplicity of understanding, a naïve optimism that every suffering in the world is merely waiting for a tool to be invented to fix it. It ends up in question begging, such as when Archigram ask; we can build aeroplanes, cinemas that travel at 500 miles an hour in the sky, why don’t offices do the same? Or when they decide that a society of electronics and informational networks requires an architecture that reflects this; is it too much to ask of architectural theorists that they have ideas more nuanced than attempting to embody the ‘spirit of the age’? How does a figure like Richard Rogers go from the complexity of Lloyds, or the valuable attempt at radicality that is the Pompidou, to Chiswick Park, whose main architectural USP is that the stairs are on the outside, thus optimising the net-to-gross? ‘Solutionism’ is a functional way that architects can continue working, a symbolic narrative that excuses them from asking any difficult questions. Keiller is obviously not a wholehearted subscriber to this attitude, but the cautious optimism of the particular period that the film was made means that the claws were kept retracted, when knowing what we know now…

And this brings me to perhaps the main problem I had with ‘the Dilapidated Dwelling’. Failure, or the lack thereof. One of the greatest aspects of the Robinson films is the attempt they make at outlining and describing an architectural melancholy; the disembodied narratives are played out against the unique urban landscape that Keiller’s camera captures so well, the viewers gaze is unmediated by significant bodies. “You and I are deeply disillusioned people”, Robinson tells the narrator after they visit the haunts of Robert Burton, and he might as well be talking to us. The lack of corporeality, the materialism of the narratives, the disconnection as well as the incessant focus on the political, rather than any emotionally introspected lugubriousness mean that the Keillerian melancholy is not that of the simple idea of haunting, spaces of individual memory tied to space; rather they begin to abstract this melancholy into something universal, a glimpse of what you might call architectural failure. It is this quality that the structure of the documentary sadly lacks, but then at the same time the aesthetic, the Keillerian picturesque, which contributes so much to the other films is here amplified by the use of video rather than film stock. Where film bestows a certain cinematic heroism to the mundane images of the Robinson films, video removes the last hint of conventional aesthetical pleasures; it takes Keiller’s quotidian romanticism and amplifies it, lending an almost unbearable poignancy to even the most boring of images.

So, anyway; not his best, but still brilliant.
at 9:32 pm No comments:

I'm sorry for the long silence but all of a sudden, and for what will probably be a brief period, I've become awfully busy with having my labour exploited. The world is still falling to pieces and all the usual shenanigans that I normally write about, and I've got some half baked texts on, among other things, Zizek's recent blunders into architectural theory and the 'dum dum dadum' funeral rhythm, but in the meantime I'd like you to listen to these; 'Four pieces on a single note', by Giacinto Scelsi.