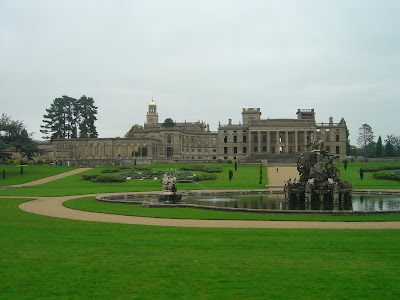 Georg Simmel, in his text ‘The Ruin,’ posits that the ruin is attractive to us because it represents a synthesis between the power of nature and the will of man. It is the resolution of upward drive and downward force. There have been many different ways of thinking ‘the ruin,’ all of which, to some degree, coincide with this concept. It is not the case, however, that ‘the ruin’ is a typology like any other, and that this synthesis between man and nature is in itself synthetic?

An excellent example is Witley Court, in Worcestershire. A rather spectacular country house, it passed through the hands of various aristocratic families, gradually moving from old money to new money, before it was almost completely destroyed by fire in 1938. At this point is was supposedly ’left to ruin,’ which of course is a fine narrative, but neither the decay that the building did suffer after this, nor its arresting are due to some extra-human power of nature.

Rather than gradually being taken back over by vegetation, collapsing, disintegrating and rotting, the building was picked clean by financial scavenging. Sold off to a salvage dealer, anything that was still of value was removed and there were acts of vandalism and sabotage aimed at allowing the building to be demolished despite its grade-I listing. English Heritage took over (rescued) the house in the seventies, and since then it has gradually come to rest in the petrified state in which it now sits.

Generally, the intention of heritage is to restore and conserve, but in a case like this, where restoration would be financially impossible, the intention becomes to consolidate – the physical state of the building is not allowed to worsen, and yet it is not improved either. It is at this point that the building ceases to be derelict, destroyed, or desperately in need of repair, and finally becomes ‘the ruin.’

It is worth describing the spatial effects that occurred as a result of transforming this derelict house into a ruin. The dominant effect is collage; the whole building is now a series of variations on two main systems, the original fabric and the structures and details used to arrest its decay. The original building is a typically stately example of a number of overlapping architectural styles, gradually built up over the course of almost a thousand years, while the insertions cover the course of the last one hundred. 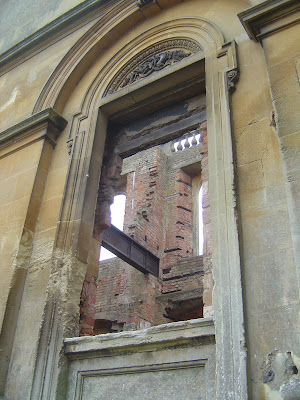 Massive cast iron beams, similar to those that hold open the walls of the shallow cut underground railway tunnels in London as they open up to the sky, prevent the walls of the ballroom from caving in upon themselves, inserting themselves into the load bearing brick in a disjointed manner. 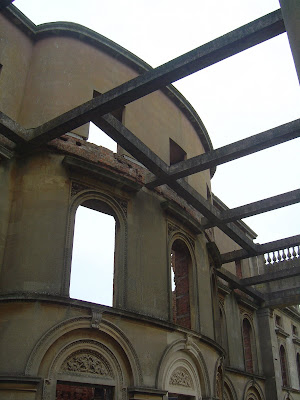 The two porticoes at either façade of the building have both lost their roofs, they are held out from the main walls by reinforced concrete beams. Unadorned; they mock the ionic columns which they meet at the corner. 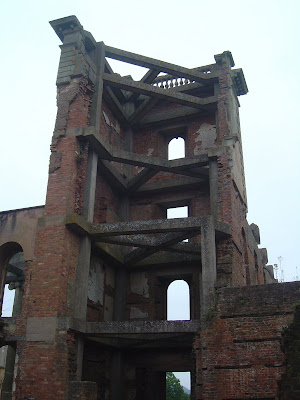 Even more striking is the way in which one of the towers, destroyed on two sides, is propped up by an unforgiving brutalist concrete frame. Here a game is played with revelation and concealment, the classical skin betrayed from two sides. 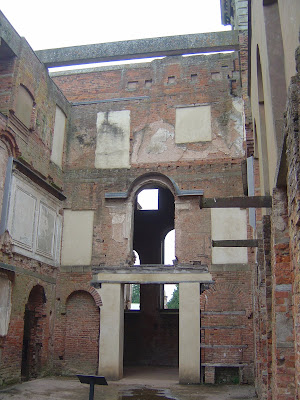 Along with the multiple structural systems in play, there are other interesting aspects of detailing. Around the house are a series of remnants of stuccoed panels, original aspects of the interior thrust out into the weather after the roof and upper floors were lost. Wherever these occur, above them have been situated lead flashings, creating drip lines that protect the stucco from being washed away. There are umpteen of these projecting surfaces around the house, exposing and protecting the surfaces beneath. Other surfaces have also been flashed, the tops of brick walls are sealed off, even when the wall has fallen to leave a serrated edge there is a zigzag of lead that follows it along and down. 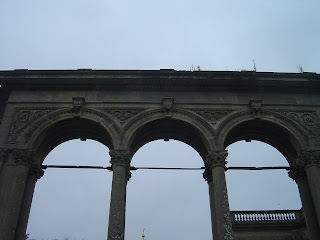 With many of the rooms of the house destroyed and now open, there are many windows which open from the outside to the outside, and many walls that mark an exterior space from another exterior space. Although there is still a small space that can be called an interior, the rest of the building engages itself with a series of screens and masks as the bar between inside and outside is stretched further and further out and around, the territory of the building becoming undefined. This effect should be considered complementary to the act of terracing the landscape, which when the house was built was meant to allow the construction to ‘blend in’ with the ground around it.

The nudity of material in the ruin of Witley Court should be mentioned. When the building was in use, great swathes of ivy covered some of the facades, and yet now there is little or no vegetation to be seen on its skin. This very much stresses the artifice of this ruination; when the building was used as a dwelling it was allowed to become slightly overgrown as a picturesque gesture, whereas now the ruin needs to be kept clean, to protect the stonework from ivy, again, to halt its disintegration at a specific point, that imposed synthesis of will and force that pleases us so.

What is to be learned from Witley Court? Of course, that the ruin is always a construct. Even when a building is not actively destroyed, neglect is not an absence of action, it is a productive force that is not outside of ‘use.’ Also, the ruin needs to be tended, to be maintained so as to satisfy us with our ruininlust. It is our thanatological architectural supplement, kept in its specific place so as to be useful to us when we want it, a counterpoint to what are supposed to be the ‘complete’ spaces that we are used to. Going further though, there is a language of incompleteness at work here, a spatial logic of disjunction and collage, of indeterminate boundary and line, a returning movement of construction, where addition and subtraction blend into each other. It is not inherently critical, but there is a glimpse of a critical language at play here, one that demands to be examined further.

A ruin is not in itself hauntological; the hauntology of ‘The Ruin’ is the spatial action required to bring the ruin out from dereliction. Extending this logic; a properly hauntological ruin would perhaps be indistinguishable from an unfinished building, a spatial logic that extends the gap between complete/incomplete. In Spectres of Marx Derrida cites Hugo, writing of the barricades of 1848: 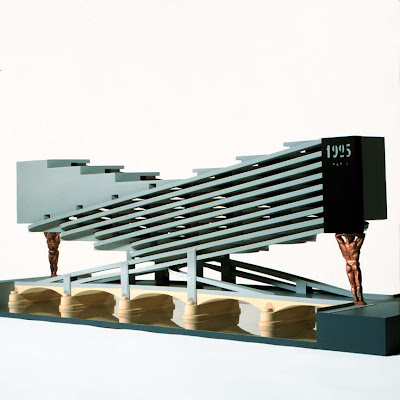 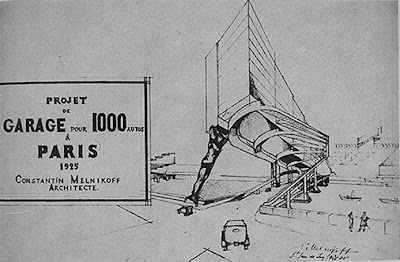 I was recently thinking about the caryatids from the Erecthyon, and how they have had a much smaller influence upon architecture as their ordered neighbours, when I came across this; an if only if ever there never was one.
at 11:42 pm 3 comments:

Email ThisBlogThis!Share to TwitterShare to FacebookShare to Pinterest
About: architecture, brutalism, Melnikov 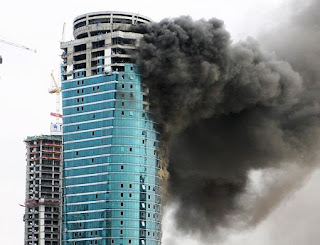 From the blurb relating to the upcoming AA winter school, which will be off to dubai:

"Today, there is an urgent need to understand the Gulf's tranformation in a different light - not one defined by a knee-jerk pessimism, but to take seriously what is often being ridiculed."

Now, I would consider the urban development of the Gulf to be worthy of both pessimism and ridicule, but for different reasons. The ridicule is basically for the nouveau riche-ness of the iconography and aesthetics of the place, a grown up disneyland with as little taste. This is of course impotent; it is reminiscent of the scorn heaped upon the rising bourgeoisie from the usurped aristocrats at the fin-de-siecle, and the pamphleteer would be correct to say that this condescending attitude (oh, the crassness, the gold!) is pointless. However, the pessimism comes from elsewhere, and it is wrong to conflate the two. It is because of the gross exploitation upon which the glitter of the Emirates is built that we are pessimistic, an exploitation that is on a different scale to what has been seen for a long time: it is not for nothing that the Sheikhs portray themselves as latter day Pharoahs, commanding their armies of slaves up into the sky. Nothing new, of course, but this is just the ever-intensifying nothing new, going taller, bigger, with worse consequences.

Then, after being informed that to criticise Dubai is knee-jerk, a solution is proposed;

"Rather than delivering a mere critique, we will initiate a critical practice of involvement."

I'm sorry, but there is no difference in the level of impotence between a mere critic of Dubai and a critical-practitioner in Dubai, it is just that one is paid. It is disingenuous to suggest that there is any kind of field in the spatial productions of the Gulf that is in any way responsive to critical practice and I can only translate the sentence above as: "if you can't beat 'em, join 'em!" Again, nothing new, the ever present Speer-syndrome, one must work for those with the power, but why must this gold rush be dressed in quasi-critical language? Of course, an ethical architect is an unemployed architect, but the disjunction between the pedagogical position and the practical position is greater than it has ever been.
at 9:58 pm No comments: