Summers on the Estate

One striking thing about the East End of London is how much it as physically changed form in the last 20 years. At around the time that the warehouses and lofts of Shoreditch were being rediscovered by the art crowd, Hackney Council was engaged in a huge programme of destruction, as various housing estates were demolished. Nowadays there are large areas you can walk through where the Victorian terraces give way to a strange, oddly suburban landscape of semis, apologetically detailed, measly in scale and generally nondescript. More often than not, if you scratch the surface you find that you are walking through an area which was at one point a large and notorious housing estate.

Despite all the much-discussed gentrification, there's probably still a large majority of people for whom the names Trowbridge, Holly Street or Nightingale conjure up memories of concrete towers, crime, drug addiction and squatting, and all the other cliches of the 1990s. One such estate, perhaps more notorious than most, for reasons we'll get to below, was the New Kingshold Estate. 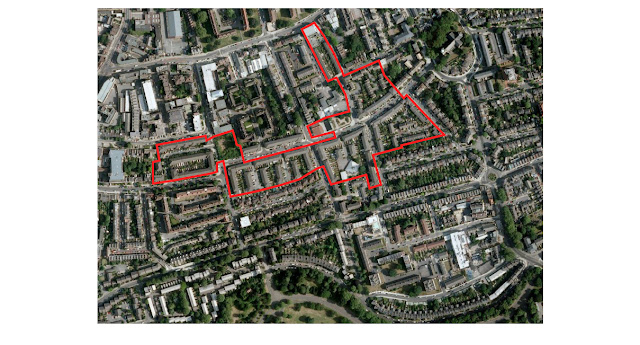 Take a look at the image above. It shows the limits of the New Kingshold Estate. If you're a Londoner you'll note the northern edge of Victoria Park at the bottom - today an area of high house prices, twee delis, baby yoga and all that nonsense. If you look at the area within the red line you'll see it is mostly pitched roofs and gardens. Indeed, the housing looks like this:

Which I'm sure everyone would agree is pretty boring as far as housing goes. It's almost trying not to be seen. But up until 1995 that very same street looked like this:

But of course if you didn't know, you wouldn't know. The New Kingshold was just one of a great many housing estates now demolished, caught up in the maelstrom of political and cultural attitudes to housing from the 1960s to the present day. But one thing that made it particularly famous was its starring role in a 1990 television documentary called "A Summer on the Estate".

This, unfortunately, just needs to be seen. The sheer misery which the people featured in this programme are obviously going through is difficult to watch. From the head of the tenants association nearly killing himself with stress as he fights for the rights of his fellow residents, to the soft-touch alcoholic unable to intervene when his 'friend' attacks him and his family, to the images of the decayed scalp (yes, really) of an elderly man whose rotting corpse lay undiscovered for weeks, it's really harrowing to see people live like this. And the architecture gets it too - the asbestos-ridden partitions, the maggots, the cockroaches, the boarded up flats, it's quite obviously a shit-hole.

But there's more going on; the programme sympathetically depicts the community activities of a group of squatters, acting as an underground housing association for those in need, walking local dogs, keeping children occupied and attempting at least to help clear up the previously mentioned dead man's house. The battles against the council to have something done show both how hamstrung the councils were when being mutilated by Thatcher's tories, while also depicting their ineptitude and general disregard for the people on their hands.

The second programme isn't much easier, with the story of the woman for whom the inability to have something done about her cockroach infested flat contributed to a nervous breakdown and the disintegration of her marriage a particular horror. But there's more going on again - nobody would begrudge these people the joy they exude when the towers are finally brought to the ground, but these very same people are well aware of the problems of what will come after, with the council barred from constructing new council houses and the questions of belonging and ownership that come with them. Indeed, many people express a genuine love for the estate, with the memories they had deposited there since they were built in the 1960s, their hatred being focussed on the problems of maintenance and neglect and general disregard shown to them by those in power.

In fact, the whole thing is a remarkably balanced view of all of the problems that showed up in these neglected housing projects; for every well-built Barbican there was a Freemason's Estate, and the fallout of that period of ultra-high housing targets, unproven pre-fab technologies and a sometimes fatally corrupt construction industry is plain to see. The war against local government is hammering these people, pawns in a game to turn everyone into a little tory landowner, and their desperation just to have any say at all in what happens to them and where they live is tragic.

And yet, and yet... look at us now, in a housing crisis that's battering all but wealthiest echelons of society, a housing crisis leading leading to the people forced to live in 'super-sheds' in the back gardens of these very new-build terraces, where being able to afford to rent even just a room of one's own is becoming more of luxury for young people even into their thirties, a housing crisis with a shortfall in construction of around 100,000 units a year, with new 'luxury' flats often smaller than even the shoddiest of the system built blocks, one can't help but think that if something, anything could have been done to bring estates like these up to proper standards, then that would have been so much better than what we're faced with now.
at 11:07 pm 1 comment: