This latent religiosity is only too observable among those disciples of Deleuze who are busy blessing, in unbridled Capital, its supposed constitutive reverse, the 'creativity' of the multitudes. These disciples believe that they saw-that's what you call seeing-in the alter-globalisation demonstrations of Seattle or Genoa, when an otherwise idle youth partook in its own way in the sinister summits of finance, the planetary Parousia of a communism of 'forms of Life'. I think that Deleuze, often sceptical vis-à-vis his own constructions once they touched on politics, would have laughed up his sleeve about this pathos.

I’d like to pass on a little anecdote, if I may. While recently attempting to enjoy an needlessly overpriced burger in the **** public house, I experienced one of the worst cases of Marshall Mcluhan Syndrome* I’ve ever had to endure. The whole meal was spent in direct earshot of a group of students from a certain establishment of architectural education, and their chat was some of the most conceited prattle I’ve ever heard (outside of recordings of my own voice, of course!). The thing that upset me the most wasn’t the ridiculous ignorance of people who are at the very top of the human pile (21st century global jet-set bourgeoisie), but the ridiculous sense of intellectual entitlement these young architects had; they almost embodied the preening self-importance of a profession that considers itself to be the last bastion of the renaissance-man. I nearly spat out my maris-piper chips in disgust as my auditory companions discussed how their rudimentary studies in Latour or whoever is fashionable this week meant that after studying architecture “they really ought to get a sociology degree as well”.

It's really strange how often one has to defend a thinker against their defenders (with Derrida-against Derrideans, with Deleuze-against Deleuzians etc), and it's more than a little disheartening. It's not as if I'm an expert in the field by any means, but I do personally know experts in the field, and thus can usually tell the difference between them and your fashion-theory types, and so-called-'radical' architecture has been completely ridden with those for about thirty-years. I can honestly say I've never tried to use ill-read Lacan to get somebody into bed, but I've certainly witnessed that occurring more often than I care to think about.

So it's extremely interesting to read Simon Reynold's brief history of pop-theory, which, although speaking of a scene I wasn't privy to, certainly has a lot of parallels with the cargo-cult philosophy of the architecture scene. But where Simon likens the 'theory basher' music journalist to a drug dealer, encouraging their audience to intoxicate themselves on the rush of intellectual hypertrophy, I'm always left with the impression that nothing ruins a good idea like its dissemination, which is of course a position of almost limitless misanthropy. If only it weren't so.

*Marshall Mcluhan Syndrome, for the last person in the world who might not know what I am referring to:

Email ThisBlogThis!Share to TwitterShare to FacebookShare to Pinterest
About: architecture, Badiou, Philosophy, waffle But to your further content, I'll tell you a tale. In Moronia Pia, or Moronia Felix, I know not whether, nor how long since, nor in what cathedral church, a fat prebend fell void. The carcass scarce cold, many suitors were up in an instant. The first had rich friends, a good purse, and he was resolved to outbid any man before he would lose it, every man supposed he should carry it. The second was my lord bishop's chaplain (in whose gift it was), and he thought it his due to have it. The third was nobly born, and he meant to get it by his great parents, patrons and allies. The fourth stood upon his worth, he had newly found out strange mysteries in chemistry, and other rare inventions, which he would detect to the public good. The fifth as a painful preacher, and he was commended by the whole parish where he dwelt, he had all their hands to his certificate. The sixth was the prebendary's son lately deceased, his father died in debt (for it, as they say), left a widow and many poor children. The seventh stood upon fair promises, which to him and his noble friends had been formerly made for the next place in his lordship's gift. The eighth pretended great losses, and what he had suffered for the Church, what pains he had taken at home and abroad, and besides, he brought noblemen's letters. The ninth had married a kinswoman, and he sent his wife to sue for him. The tenth was a foreign doctor, a late convert, and wanted means. The eleventh would exchange for another, he did not like the former's site, could not agree with neighbours and fellows upon any terms, he would be gone. The twelfth and last was (a suitor in conceit) a right, honest, civil, sober man, an excellent scholar, and such a one as lived private in the university, but he had neither means nor money to compass it; besides he hated all such courses, he could not speak for himself, neither had he any friends to solicit his cause, and therefore made no suit, could not expect, neither did he hope for, or look after it. The good bishop, amongst a jury of competitors thus perplexed, and not yet resolved what to do or on whom to bestow it, at the last, of his own accord, mere motion, and bountiful nature, gave it freely to the university student, altogether unknown to him but by fame; and to be brief, the academical scholar had the prebend sent him for a present. The news was no sooner published abroad, but all good students rejoiced, and were much cheered up with it, though some would not believe it; others, as men amazed, said it was a miracle; but one amongst the rest thanked God for it, and said, Nunc juvat tandem studiosum esse, et Deo integro corde sevire [now at length it proves worth while to be studious, and to serve God whole-heartedly]. You have heard my tale: but alas! it is but a tale, a mere fiction, 'twas never so, never like to be, and so let it rest.

-Robert Burton, The Anatomy of Melancholy
at 9:59 pm No comments:

Email ThisBlogThis!Share to TwitterShare to FacebookShare to Pinterest
About: Burton, melancholy, Sarcasm

Now of course the bridge is one of the most virtuosic of engineers' structures. There is perhaps a tendency to assume that utilitarian structures are semiotically blank, have no significance, solutionism at its most pure. But of course, it's never really as clean as this.

Take the Milau viaduct in France, designed by Michel Virlogeux and Foster's. This is big, it's big, it's unbelievably big. It's also blank. Over 300 meters high, stripped down, almost minimal, if anything that bloody big could be said to be minimal. It makes a virtue of its simplicity, its lack of fuss, its attention to function. 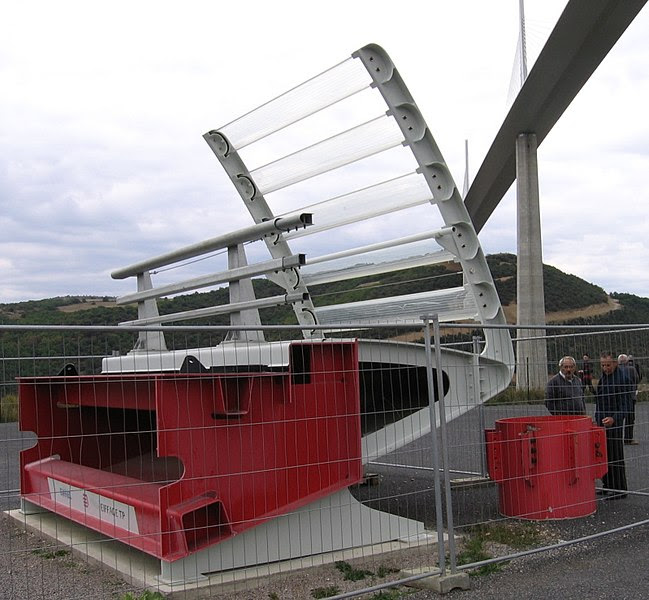 But of course, you can see that it has Foster's written all over it, the type and shape of concrete, the curved section, the guard rails, we recognise in them an architectural language just like any other. There is only so far you can follow the logic of functionalism before you're left with purely aesthetic choices. In which case, the architect just covers their tracks with solutionist rhetoric; you see, it absolutely HAD to be this way. 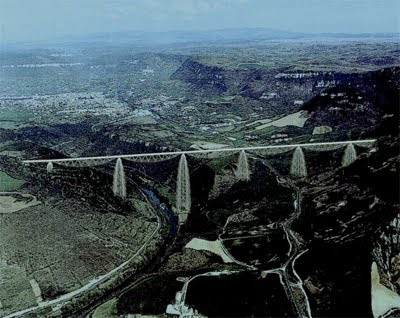 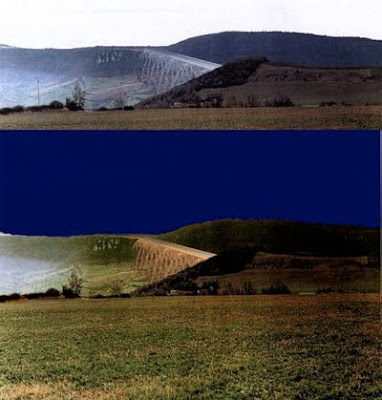 But here's an interesting thing. This is Francis Soler, Jérôme Lauth and Vincent Jacob's entry to the same design competition. Francis Soler is one of the new ornamentalists, his Ministry of Culture project in Paris is covered in a perforated latticework that is reminiscent of Guimard, and this project is remarkable for its attempt to invoke a previous language, in a structure often thought to be purely functional. Don't forget how massive the span and distance of this viaduct is, and think of the effect of this filigree structure when viewed from the distance. And of course, it's steeped in history, it's an evocation of Eiffel, transforming his bridges and towers into what is simultaneously a work of post-modern reference and hi-tech trickery. It's also a little reminiscent of Nouvel's Institute of the Arab World, also in Paris, what with its super-tech responsive mashrabiya. 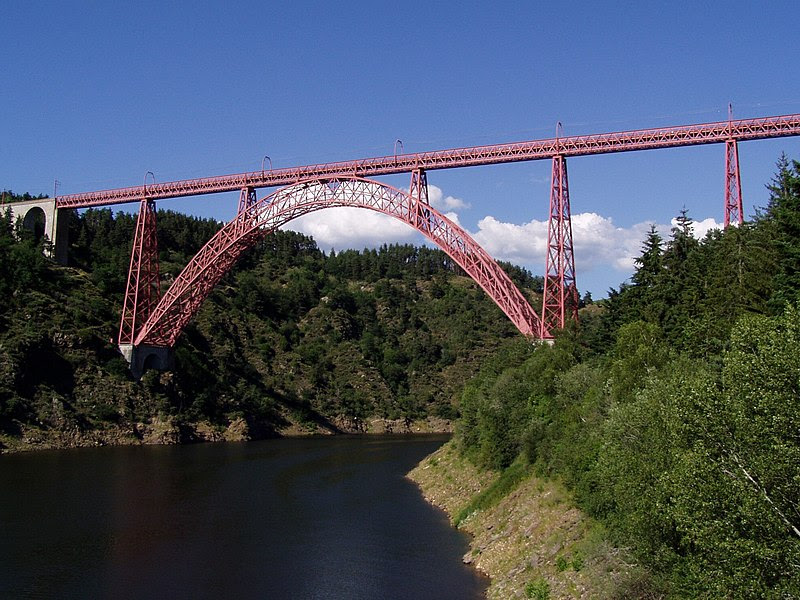 Basically, a project like Soler's, both unprecedented and also entirely familiar (uncanny, perhaps? maybe not...), a project like this undermines the Hi-Tech insistence in the ideological emptiness of solutionism.
at 7:55 pm No comments:

Email ThisBlogThis!Share to TwitterShare to FacebookShare to Pinterest
About: architecture, Foster, pomo, solutionism

I featured this before when it was first discovered, but now there it has been released on vinyl by Dust-to-Digital. Basically; it's the earliest recording of the human voice ever made. It was made by Éduoard-Léon Scott de Martinville using a phonautogram - basically a one way microphone, and it was literally engraved into dust on a piece of paper, with no real way of replaying the sound. What has now been done is that the image of the sound has been scanned, and then reconstituted into sound. It's funny, because when it was first replayed, they got the speed very wrong and thought it was a recording of a peasant woman, when in fact it was Éduoard-Léon recording himself.

It does bother me, though, that there's no real information on exactly what programme was used to rebuild the sound. There are numerous bits of software such as coagula or metasynth which allow you to generate sound from an image, and I'm suspicious that this is all that they've done, which would make the resulting sound a very tenuous recreation of the original (even on a good day, if you take a sound, store its spectrogram and then input that back into the image-synth, the decay is substantial...) Basically, to call it the earliest recorded music is to be highly dismissive of this, something I've also featured before:


At the Crystal Palace they used to hold a triennial 'Handel Festival', with around 700 musicians, and 3,000 singers, and an audience of 20,000, and in 1888 this was recorded for the Edison company, which is the music above (note; the photograph was taken at the last festival in 1926).

If this wasn't haunto enough for you, a wee quote from the Musical Times, found in Musgrave's 'The Musical Life of the Crystal Palace' is telling. It regards the installation of a new ceiling for the concert hall, in the main transept of the palace, in order to solve the reverberatory problems of all that iron and glass:

Some of the chorsuses are no doubt heard with better effect than others; but the fogginess and uncertainty incident to the manifestations of the former festivals are wholly got rid of.

reverberations = fog and uncertainty. It's like a ghostly formula.
at 11:17 am No comments: