Patrick Keiller's film The Dilapidated Dwelling (78 mins, beta sx, 2000) is an examination of the predicament of domestic space in advanced economies, the UK in particular. A fictional researcher (with the voice of Tilda Swinton) returns from a 20-year absence in the Arctic to find that while the UK is still one of the world's wealthiest economies, its houses, flats etc. are typically old, small, dilapidated, architecturally impoverished, energy-inefficient and, especially, extraordinarily expensive. The film asks why repeated attempts to modernise house production have not been more successful. It includes archive footage of Buckminster Fuller, Constant, Archigram and Walter Segal, and interviews with Martin Pawley, Saskia Sassen, Doreen Massey, Cedric Price and others.

Following the film, Keiller will be in conversation with Douglas Murphy to discuss the UK's dystopian housing economy and its exploration in The Dilapidated Dwelling and in The View From the Train: Cities and Other Landscapes, Keiller's first collection of essays published by Verso Books (November 2013).

Email ThisBlogThis!Share to TwitterShare to FacebookShare to Pinterest
About: keiller, me me me

A curiosity in Islington: the Packington Estate. 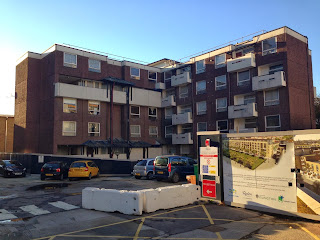 I've been past this quite estate a few times, and since it is currently being demolished I thought I would grab a couple of images of it, because there's some strange things going on architecturally. First off is that it's a rather overt example of panel construction. The system used was the Wates system, and here you can see the simplicity of the large panels (in a strange, burgundy hue) and the various sketchy points where they were sealed together. Many of the systems from back around the 1960s (This estate was finished around 1970, designed by Harry Moncrief) worked with a mixture of pre-fab and in-situ concrete - the panels would be hoisted into place, and small areas where the walls and floors met would be cast on site. A lot of problems of the system built blocks were located at these points, the hasty and frequently negligent construction methods leading to cold-bridging and all sorts of issues. I have no idea how the Packington Estate performed, although the fact that it lasted this long means it probably wasn't terribly built. 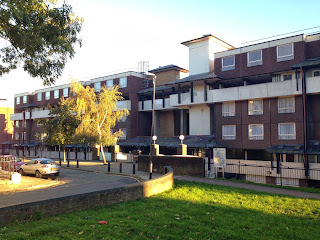 It's not pretty, to be honest, although the design does accommodate quite large windows. It's a series of what are presumably maisonette blocks judging by the alternation of the deck access balconies (which, like on so many estates, used to link all of the blocks together). But look closely, there's something really odd going on. 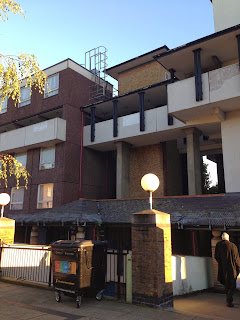 Because the Packington has managed to pick up all manner of strange postmodern encrustations. 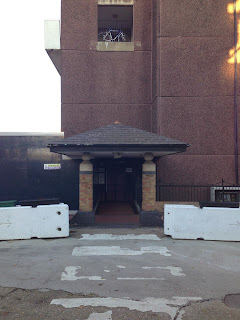 Worked on from 1989-94, the estate was refurbished by David Ford Associates and Islington Council Architect's Department. The additions are a perfect example of 'council pomo' - noddy hat roofs, that odd mix of yellow, red and blue brick, and a rather silly, jolly classicism. Aesthetically it's very much of the period of Thatcherite reaction, although it's an ameliorative style; the architects had little choice but to work within a certain neo-vernacular framework, but they're trying not to be too cocky or brash about it; there's no polished granite, for example. 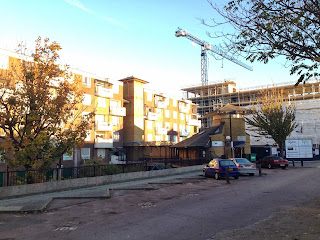 You can see the interventions reasonably clearly here - pagodas, baubles, new vertical circulation cores,    and a district housing office. Behind you can see part of the estate's redevelopment, which strangely for London includes houses specifically built to accommodate the people who currently live on the estate, which is remarkable considering how terrible the housing situation is becoming in London, especially remarkable considering the unbelievably sickening scandal down at the Heygate Estate in Elephant and Castle. 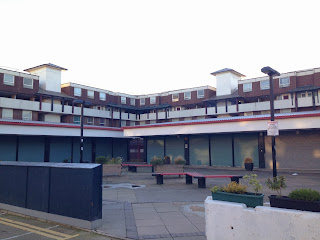 Can't really say much positive about the shopping arcade really, it's pretty nondescript, although it's obviously been deliberately run down as part of the redevelopment. One frequent complaint about post-war housing estates is the lack of amenities, but in many cases this doesn't ring true. Many estates had perfectly adequate sets of shops built to go with them, along with community facilities. But one thing that doesn't quite offer is, how should I say, glamour. We might look with a smile on the signage and design of 1960s bakers and grocers, but retail has come quite a long way since then, and the out-of-town shopping centre was such a massive social development in the 1980s that everyone became used to that mode.

But at this stage in commercial history, the small independent retailer has enjoyed a certain renaissance, at least in areas with a sizeable middle class. Considering that some of the more lush parts of Islington are just around the corner, can we imagine a situation where some organic deli took over one of the shops here? Personally I can't think of a single Aussie coffee shop located in a post war modernist shopping unit, just as I can't think of any estate pubs which have been hipsterified. Why might this be? 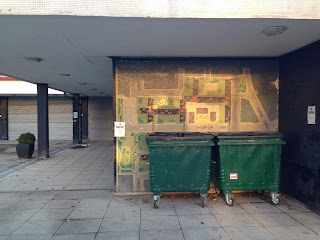 The blandness of the shopping centre was lightly decorated by a rather charming little mural showing off the plan of the estate, enlivening one wall, even if it had been mostly hidden by the bins. 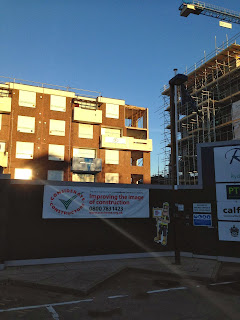 And here you see the panel construction itself - note how skinny the panels actually are. You can see the thickness of the roof, which is insulated, so I expect that the block extended further past this visible bay. Soon there won't be any of these kinds of buildings left at all, as all the last remnants of the quotidian architecture of the post-war era seem to be on their way out; in the way of redevelopment, their styles and tenure out of favour, they are vanishing in much the same way that the most neglected of the slum housing of the Victorian era vanished. 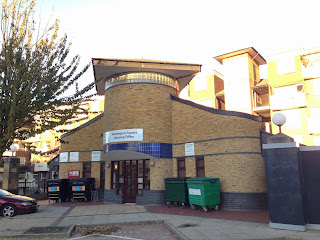 And this, the housing office, good grief. There's a lot of this architecture around, the naff, post-CZWG pomo which dominated before the New Labour pseudo-modernist style took off. This is just inept, really; the rotunda, the awkwardly angled, badly detailed roof, the banding on the brickwork, it's so half-hearted, so inane... 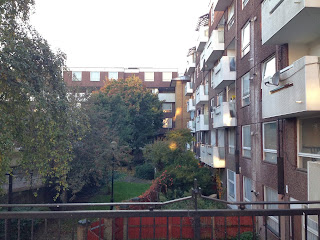 Well, it's hardly of serious interest, the Packington Estate. But at least those who still live here (and there are lots still here) are not going to be scattered across the country when the redevelopment is finished, like is happening in so many other places.
at 12:16 pm No comments:

Here is another of Bach's organ chorale preludes, transcribed for and played on the guitar.

'Vor deinen Thron tret' ich' (Before your throne I now appear) has an interesting story behind it, and although I'm not really in a position to properly explain or analyse the music or its history, I can at least give some notes that help explain what's going on.

BWV 668 is a chorale prelude, meaning that it is a piece of instrumental music which takes as its main thematic material an existing song. In this case the original music that the piece is based upon is a hymn entitled 'Wenn wir in höchsten Nöten sein', which was originally written by Paul Eber in the 16th century. The source melody (or cantus firmus) was composed by Louis Bourgeois, also in the 16th century. Bach had previously arranged this hymn as BWV 431, as below:

If you listen there, you'll note that there are four main melodies, each separated by a fermata (pause). It is these four which become the source for BWV 668.

Reasonably early in his career, Bach created an organ chorale prelude from this piece, BWV 641, under the original title 'Wenn wir in höchsten Nöten sein' which I have previously transcribed below:

and as played in the original:

What Bach does with BWV 641 is create an accompaniment which is based upon the melodies of the original hymn, but then adds an ornate cantabile melodic line over the top, which I'm sure you'll agree is rather exquisite.

'Vor deinen Thron tret' ich' actually exists in two different versions. BWV668 is included in the 18 Great Chorale Preludes, and actually consists of a fragment (about two thirds) of the entire composition, copied out by someone other than Bach. BWV668a is the same piece, complete, with slight differences, which was included (under the title 'Wenn wir in höchsten Nöten sein') in the original publication of Art of Fugue, published after Bach's death in 1751.

There is a story that was perpetuated by Bach's son CPE Bach, that his father dictated the chorale directly from his deathbed. This is now considered to be rather flamboyant myth-making, which gave the piece the nickname 'The Deathbed Chorale'. What is actually now understood to be the case is that BWV668a was a piece that was just lying around (Bach was an inveterate re-worker of old material), which Bach decided to put more work into as he lay dying, meaning that although it was not composed out of nowhere, it was still the very last thing that he worked on, and thus a significant artistic statement.

Musically it's really quite complex. It is built in four sections, all composed from fragments of the original hymn melody, diminished, inverted and contrapuntally developed. These lead into statements of the cantus firmus, clearly taken from BWV 641, albeit with the ornaments and floridity removed, before each time the all but one of the voices drop out for another development section. There's a certain plodding quality to the rhythm, which is pretty uneventful, but the level of harmonic interest is high. This regular and systemic feeling is common to some of Bach's large fugues, and perhaps has a certain mood in common with Beethoven's 'Heiliger Dankgesang', another piece closely linked with illness, which also builds slowly and methodically out of simple contrapuntal blocks.

As for the guitar, it's actually quite interesting how snugly it fits onto the instrument. The piece is in G major, and didn't require transposition to be playable (unlike BWV 641, which needed to be moved to D major). G major on the guitar works reasonably well if the 6th string is tuned to D, which means that a low D (the dominant) can be played open beneath the lowest G on the instrument (which thus occurs at the 5th fret). Very few notes, if any, had to be omitted, although there are problems caused by the occurrence of tones on the organ sustained over multiple bars - on occasion these have been rendered as repeated notes. The sections in four parts are particularly satisfying, although the fact that they are so readily playable on the guitar is perhaps down to the lack of rhythmic variety, rather than any particular skill on my part.
at 4:31 pm No comments:

- Ralph Harris discussing the early 1970s years of the Institute for Economic Affairs in Andy Beckett's 'When the Lights Went Out', p. 273
at 2:57 pm No comments: