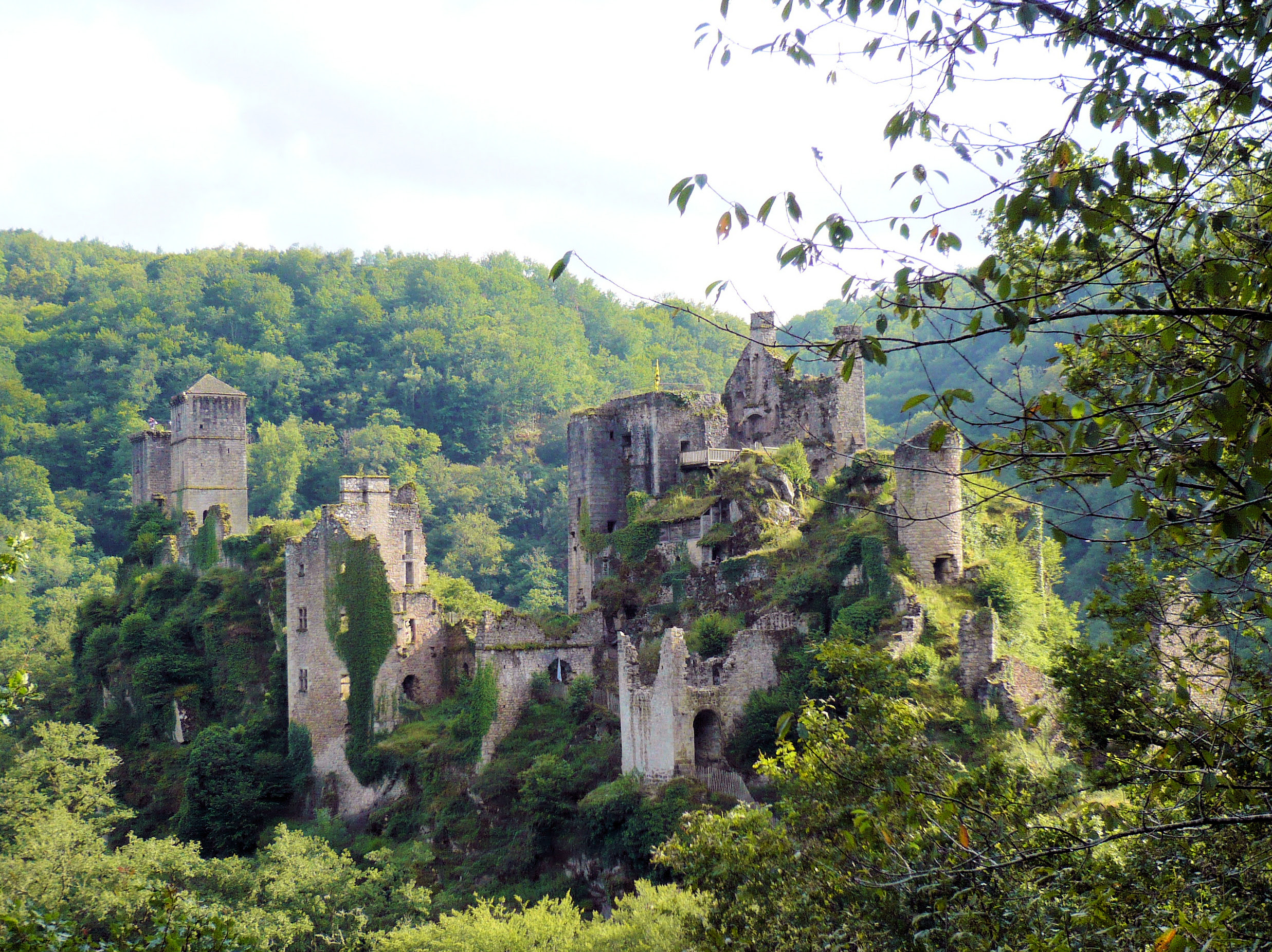 So, on my recent trip to France I was hunting for postcards, and I saw this, at which point I turned into a little spoilt brat and began begging my friends: "Please! Please! Can we go? Can we? PLEEEEEAAAAASSE!!!!??!?!" So we went, and it was a great day out.

The ruins in question are the Tours de Merle, a 13th century citadel that played a role in the 100 Years War but were gradually abandoned after its strategic significance waned.
at 10:19 pm No comments:

Email ThisBlogThis!Share to TwitterShare to FacebookShare to Pinterest
About: the ruin

The end of the world, unique each time.

Here's a few brief notes on a somewhat-less-than-cheery book I read while I was away, Jonathan Littel's The Kindly Ones. I know one person who has read this, so would perhaps like to discuss, but for the rest of you this will probably be not much fun. I'm also going to be spoiling it, so beware...

Forrest Gump in the Holocaust
One thing that struck me about the structure of TKO is that it in a way mirrors the construction of Forrest Gump, that mawkish and generally bollocks film that cleared up at the Oscars all those moons ago. You'll remember the premise: Forrest Gump, a man who suffers from an unspecified learning difficulty, manages to 'find' himself in all manner of significant moments in American history, through sheer accident and serendipity. Well, Littel has done something very similar here. Max Aue, the protagonist of TKO, 'finds' himself at a number of the very most infamous moments of the Second World War. He attends the Babi Yar massacre, he is trapped with the Sixth Army in Stalingrad, and he is right there in the 'Final Solution', among other events. Littel's planning is immaculate: the research he put into the book is famous, and it has been praised for its 'accuracy', if such a term is praise in this case. But it's a similar premise to Gump - playing with events that the reader will presumably know about, while tying them together with crushing detail that swamps the reader, all the while throwing in a number of knowing asides referring to this process.

Ulysses in the Holocaust
Another obvious comparison to be made is that between TKO and Joyce's Ulysses. The two novels, both massive, are structured around texts from Greek literature. Where Joyce used the Odyssey, Littel uses The Eumenides. Both of the novels create a kind of representational matrix around their fastidious historical accuracy, with scenes and characters specifically the correspondents of their classical template. But the differences are almost mirror-like. Whereas Joyce took an epic poem and used it to signify heroism within the quotidian and the mundane, Littel uses a tragedy, and somehow evokes the crushing banality of ultimate human horror and suffering. Both also manage to use boredom, and boring the reader, as powerful tools. The way the initial horror the reader feels at the massacres and murders that Aue witnesses, supervises and takes part in slowly fades to a consistent rumble of terror is frightening precisely because it's easy to think that this might be how it works for those committing terror; one latches onto details and routines, as the incessant roar of death and misery becomes featureless and constant. On the other hand, some of the characters that Littel uses to correspond to his classical model (such as the two policemen) seem superfluous, crammed in for the sake of structure.

Magic Realism in the Holocaust
For many reasons I thought TKO was a far better novel than 'Everything is Illuminated', upon which so much praise is lavished. Indeed, after TKO, one finds Safran-Foer's whimsical magic realism a little harsh, cynical. Although the terror described by EiI is powerful and harrowing, it's also mawkish and sentimental, and seems in retrospect to be somewhat lightweight, despite its genuine horror.

Sex-dreams in the Holocaust,
But this brings me onto another thing, something that at first annoyed me about TKO, but later I found more ambiguous, confusing. Aue is a bureaucrat par excellance, a taker of notes, a writer of reports, a ticker of boxes. In many ways he embodies the stereotype of Nazi evil, and in a way it is only his cultured bourgeois attitude, and his tragic family story that raise the character out of the sterility of the Eichmann stereotype (although of course Eichmann is a major character in the novel). But although until about half-way through the novel the detail is horrific and drab at the same time, before long fantasy begins to make its presence felt. Long hallucinatory passages start appearing, often related to starvation and weakness. At first I was put in mind of Sartre's 'Iron in the Soul', which features a long hallucinatory sequence as one of the characters starves in a prisoner-of-war camp. But beyond that, and once the dreams and fantasies start to become hyper-sexual, it was 'Gravity's Rainbow' that really came to mind. GR is, from start to finish, dream-like and fantastic, and luridly sexual. But this is a consistent trajectory of that novel, whereas in TKO it often feels like an intruder into the lucid and dry bureaucratic side of the novel. Of course this is the point, but there's different ways I can read that: either it's a way of making things happen in the novel (Aue's escape from Stalingrad is a little convenient for my liking), in which case it's a weakness. On the other hand, the difference in register between Aue's increasingly numb reaction to what is going on around him, and the increasing hysteria of his dreams and fantasies, might be read as a pessimistic admission that not even a catastrophe of that scale can take one away from one's own psyche, one's own neuroses. Or perhaps, on the other hand, Littel is trying to make a strange and minor redemptive point, that horror of such scale is not something that can be coasted through, numbly, and that the mental disintegration is to be understood as probable and another level of accuracy. By the end of TKO, one is never sure if anything is actually happening at all, what with Aue having such a tenuous grip on reality. Indeed, the only things holding the novel together at all are the dates, the details that Littel has been so careful with; History.
at 11:33 pm No comments:


There will be nothing on here for the next two weeks as I'm taking what feels like a well-earned break. In the meantime, here's a recording I made of my own arrangement of Wagner's 'Im Treibhaus' from the Wesendonck Lieder, as mentioned previously here.

I'm slightly pleased with having done an arrangement of this piece, if only for the fact that a German Romantic lied about being melancholy in a greenhouse more or less covers all of what I've been talking about for the last year or two. Add to that the sheer morose joy of the repeated iv-i-iv-i (in minor, of course) and you have hopefully enough to temporarily fill the 'desolate, empty, horrible void' of my absence(!)
at 3:00 am 1 comment:

Email ThisBlogThis!Share to TwitterShare to FacebookShare to Pinterest
About: guitar, iron and glass, me me me, melancholy, music, romanticism, Wagner
Newer Posts Older Posts Home
Subscribe to: Posts (Atom)