In honour of the current immaterial turmoil, we went a-wandering, looking for material evidence. We were accompanied by Lady Vergeht and the textual ghost of a certain Mr. Pevsner. Our journey began on the new 135 bus route, which links Crossharbour and Old Street, and conveniently passes E&V HQ (oh, where you three years ago, oh great five minute shordeditch-doorstep link?). 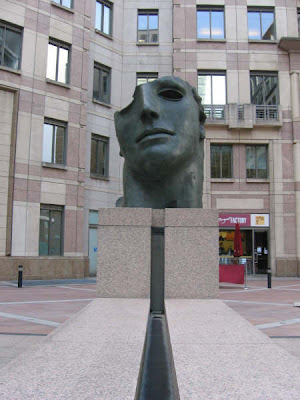 The square in which this fellow sits was a good four degrees colder than its surroundings; perhaps his mood had affected the microclimate. Below his face there runs a channel, totally dry upon our visit. It is conceivable that he has cried himself out. (Also note the Neo-Classicism, the defining cultural motif of the entire area). 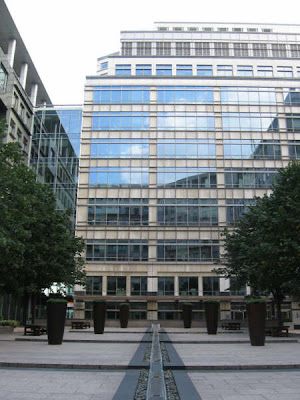 Day in, day out, he stares at this glass wall, until either it or he goes. 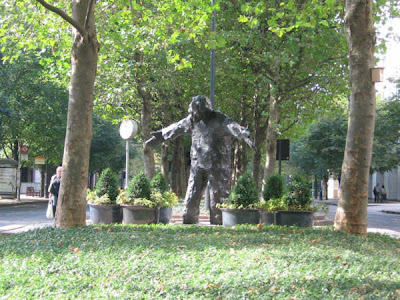 This chap has been trapped in a forcefield created by the overwhelming symmetry of the Beaux-Arts planning of the area. SOM employ corporate magicians to generate conservative ley-lines. 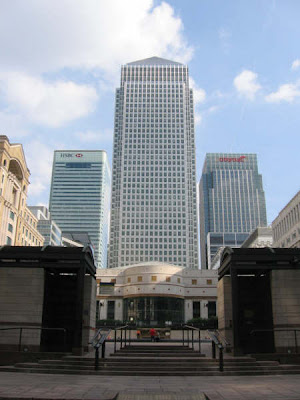 This totem is where the dark energy of the area emanates from. The use of stainless steel cladding is supposed to be a nod to British Hi-Tech, despite the crassness of the Pomo form. Note Pelli's buildings for the WTC in New York. It must be said that perhaps it was the best decision - pink marble would have been a sickening sight, almost too much to take. This is also, of course, Robinson's memorial to Rimbaud. 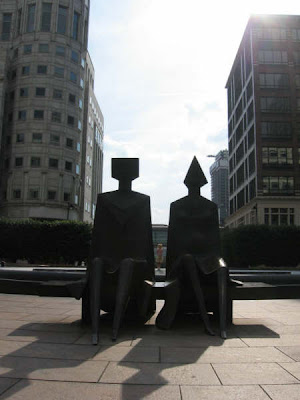 Lynn Chadwick contradicted our sexual assumptions, by revealing himself to have been a man. His figures refuse to face either the totem, or the vacuous Louis Sullivan pastiches in the background. 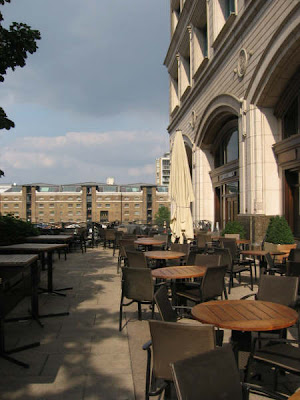 This abandoned cafe gave a tantalising suggestion of what may one day become of the wharf, inshallah. 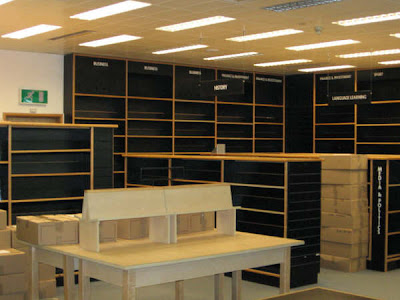 The end of history. 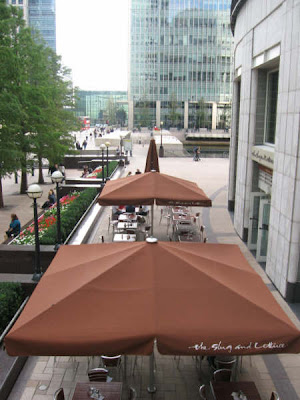 This is the infamous Slug & Lettuce, home to braying hordes every Friday evening, recently scene of much deserved consternation, though probably not nearly enough revelation. 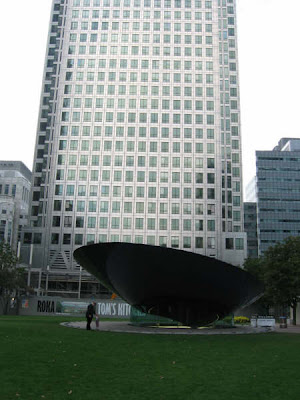 The only thing even remotely interesting about this sculpture is its asymmetry and off-axis positioning. It seems to act as a transgressive supplement, the breaking of the rule that allows the rule to function ever more efficiently. Otherwise it is another boring example of both a maker of small objects making a large small object, and the mistaken conflation of structural daring with sculptural content. 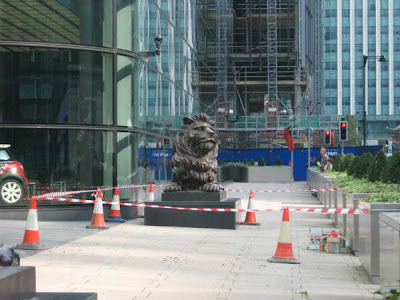 Outside the Foster & Partner's HSBC building, a piece of architecture remarkable in its seemingly infinite dullness, a pair of lions sit, identical to those that guard the building's Hong Kong counterpart. This one is off limits - perhaps it has sensed weakness amongst the passing bankers and has made moves to pick them off? Or maybe a despairing broker tried to feed themselves to it? 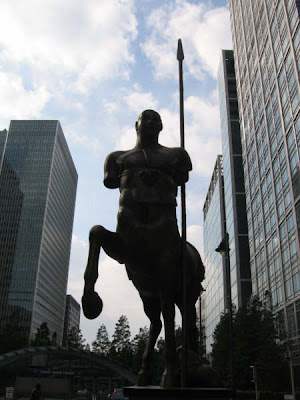 Another Neo-Classical object, this centaur wonders why it was considered witty to create him without arms, as if they had fallen off in a non-existent period following antiquity, when he was made of marble. 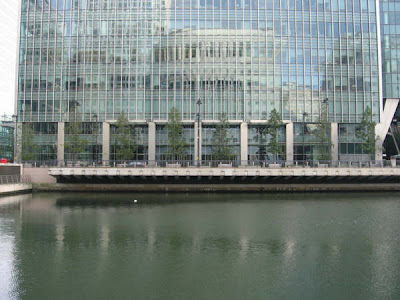 25 Bank street, until last week home of Lehman Brothers, sat silently and opaquely in the cold sun. There were no stains on the ground, no signs of violence. The Barcelona chairs still sat in the lobby, waiting... 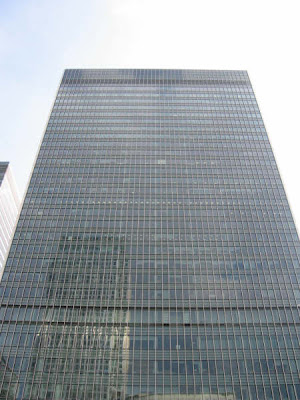 And we waited a while too, but nobody jumped (it was the weekend, after all). 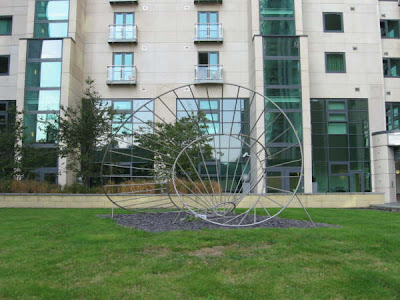 At first glance we thought this represented a moebius band, but it has two 'faces'. The dedication plaque in the centre reads; "Don't cry because it's over, smile because it happened." 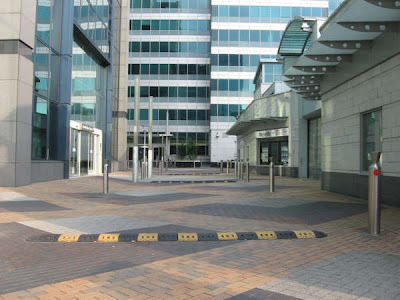 On the 9th of February, 1996 the IRA exploded a bomb at this exact location, killing two newsagents, who had not been evacuated in time, and causing £85 million worth of damage.


The following building will be explained in the words of its architect; John Outram. 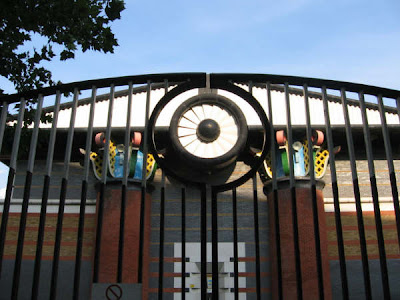 My proposal is that Architecture can not be derived from 'dwelling' in any banal, roses-round-the-door, 'domestic' sense. To make such a reduction is a mark of what J.P.Sartre characterised as "l'homme, moyen, sensuel". Architecture is the diametric opposite of such well-upholstered, 19C, flaccidities. It is, instead, the making ourselves 'at-home' in the Kosmos. Architecture, and its only 'serious' purpose on a scale larger than the single project, is to build a general, large and civic lifespace that sets us, paltry humans, 'comfortably' situated within the Cosmos. 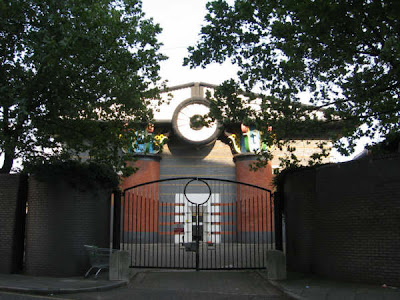 The source of the 'river of time and space' rises in its characteristic icon of a cave set within two mountains. This is the circular fan situated between two halves of the pediment - that have been deliberately split to register their division. From here the river flows downwards -registered by the blue (watery) bricks split by strips of lighter yellow. This river flows between the giant trees of the forest (nave) embodied by the main capitals with their foliate capitals. The forest, in its turn, is flanked by the enclosing 'battered' walls of sedimented brick which embody the 'mountains' that finally define the Vallery of Community, that is the ultimate spatial figure of the Architectural medium - equivalent to the dominating Vitruvian function of 'Commoditas'.

Having 'tumbled' down its 'valley' the 'river of space' passes under the 'gateway' to the Valley - embodied by the exaggerated white masonry surrounding the dark green entrance door. From there it flows outwards, towards the gate to Stewart Street, or the river Thames on the side of the 'levee'. It was not practical to inscribe the figure of the 'delta' which lies outside the 'gateway-door into the building'. Nor could either the street, or the River, be inscribed with the figure of infinity with which one may recall their 'bounding' identity as the 'death of the valley of community' by dispersion into the Ocean 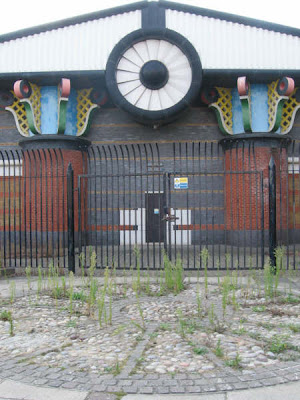 We confined our work on the Vitruvian dimension of 'Venustas' - or the 'conceptual environment', on the outside. Even so, when the structure, whose iconography we have so engineered, is merely a large shed whose sole physical purpose is to pump dirty water from storm overflow sewers back up into the river Thames. One may well ask "What, then, is the legitimacy of our 'display'?

A simple answer, not entirely without weight in a 'free country' is that Ted Hollamby, Chief Architect-Planner of the LDDC, sole authority at that early time of its development, wanted it. Prime Minister Thatcher, with her drive to suppress all forms of 'government' decreed that the LDDC would only build infrastructures - roads, sewers and so on. It would not be allowed to 'express' its suspect 'liberal' and by implication Socialistic, culture by building anything above ground. The Isle of Dogs would be a monument to the ethic of 'commercialisation'. The three Pumping Stations were Ted Hollamby's only chance to introduce some 'quality'to the gruesome diet of British Developer's Drivel that marked the early years of Docklands. 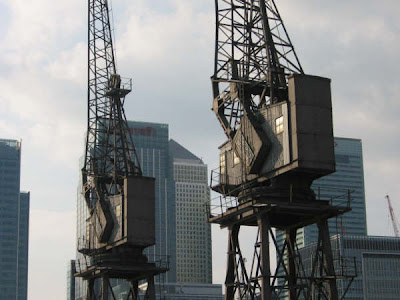 There are still hints of a past here, it pays to leave artifacts of previous modes of production, to leave material relics. 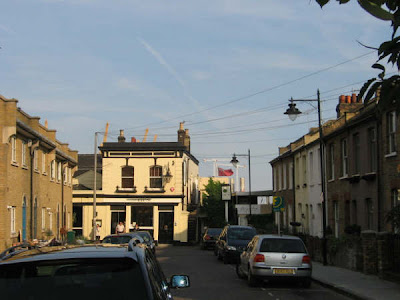 We quenched our thirsts in a pub that has gigantic yellow skylons sticking from its roof. It was populated by a strange mix of local red-faced eastenders and two meter tall russian girls who had arrived by speedboat. 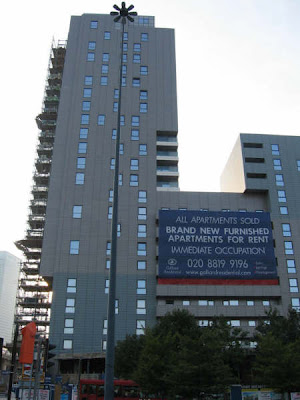 An incitement to occupy. 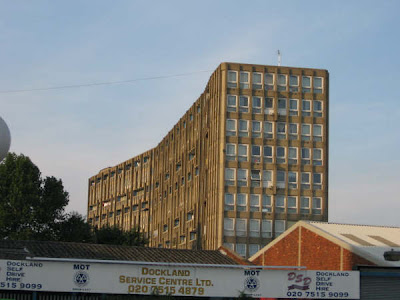 And finally, the walk ended at Robin Hood Gardens, looking strangely dignified in the setting sun. 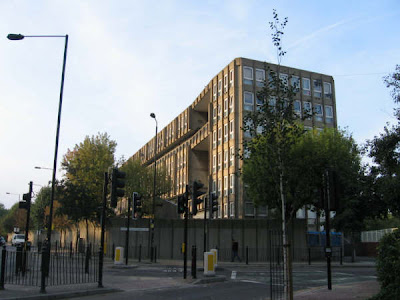 The estate suffers most from its location. It is flanked to the east, south and west by busy roads, and thus has been hidden behind sound barriers that remind one of Virilio's bunker. But whereas a church has an eschatological link to military outposts, a home doesn't wish to speak 'war'. 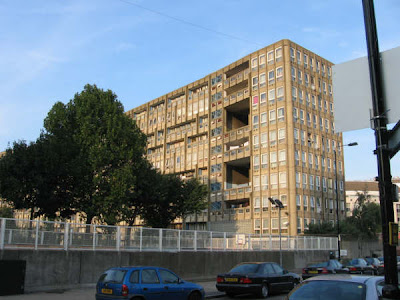 As we passed, we surmised that there was a hybrid game of football/tennis going on in the sunken games pit, judging from the balls that flew above the parapet. Perhaps it was a spontaneous counter-unique sport to Eton fives? 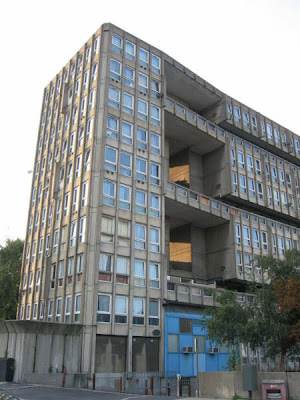 The visual language of RHG is interesting, for representing a definite attempt to speak Modernism with a post-Corbusian dialect. The five points do not exist here, and there are no formal references to purism. Whereas most 'Brutalism' speaks fluent Corbu, from bullhorn profiles to shallow concrete vaults to ondulatoires and so on, we have here something not more, nor less ordered, but differently organised. 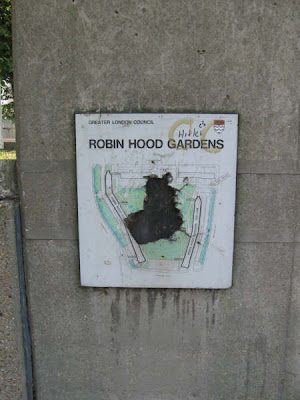 An atlas ought to be compiled of all the estate maps of London. 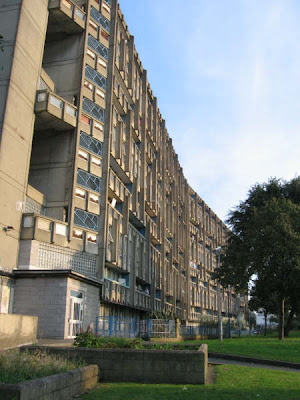 The buildings seemed casually indifferent to their uncertain fate. 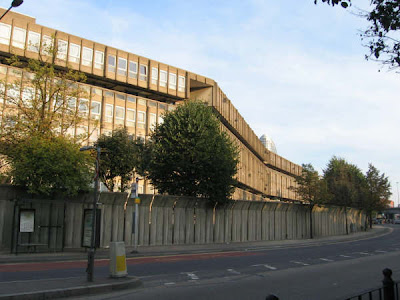 A typical conversation runs as follows: 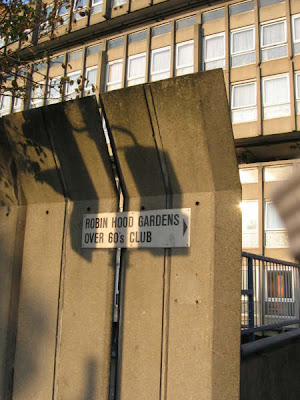 And then home, as the sun finally set on what may well have been the last day of the 'summer'.
at 1:52 pm

No blood on the streets, eh? I didn't hear of anyone jumping out of high-rise windows over this one either. Seems that people in finance don't have the dedication they had in the good ole' days...