My Favourite New Building in London

SO let's be honest amongst friends here, you can trust me. I know that it's hard to admit because you've made such a massive investment in trying to believe that it's not the case but nobody's going to look down on you for just admitting it:

It's not like people don't try hard, god knows it's difficult! But everything's stacked against good buildings these days. The most interesting and powerful materials leak and pollute, there's no certainty of expression, while clients are either so tight that they threaten to cancel the project if they're expected to build anything more urban than sky-high sardine-stuffed trading floors with a disgusting 'Pret' at the bottom, or they're spending god knows how much of their money on unbearably juvenile monuments to their own vacuity and serendipitous slide to the top. There's no joy in technique any more either - the cutting edge no longer looks forward but is becoming so involuted it's in danger of cutting its own guts out from the inside. So when someone asks me, as they occasionally do; "What's your favourite new building in London?", I usually just flounce around like a gasping fish, changing the subject as quickly as possible. 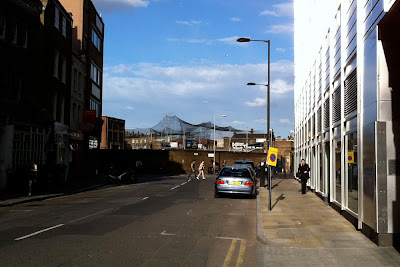 BUT! These days I have something I can actually enthuse about, a building that is actually interesting, refreshing, formally inventive and historically rich. It's the golf range at Broadgate! 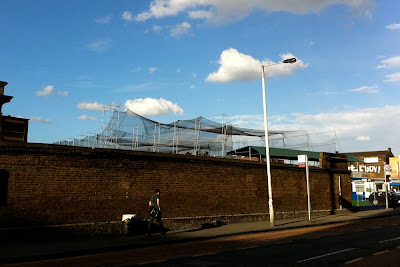 Ok, so it's a golf range. But just look at it! It's situated on what has been derelict land for quite some time now, situated next to the Light Bar (where I've only ever drank once, I think, at a terrible time when I was worried that a loved one might be very ill, and the barman couldn't even make my Guinness properly). Anyway, the site immediately to the south recently had the Broadgate tower built upon it, a thoroughly banal tower of spec offices for besuited arseholes to not be at all productive within, while the site upon which the golf range sits is earmarked for a bad Foster's building, of which there are a bunch to the immediate south at the utterly wrecked Old Spitalfields Market. We’re very much at the frontline of the City's expansion into the East End, a situation we are surely seeing the endgame of now, what with the depressing arrival of private members clubs, Gucci shops and posh idiots who didn’t even go to art school, not to mention 'pop-up malls' and 25 storey blocks of luxury flats that 'respect the small-scale urban grain'. That said, the golf range (and the five-a-side football pitches beside it) are essentially pop-ups as well, although they seem less about slimy commerce cynically grabbing cultural capital and more about using cheap space for a limited time - London's more old fashioned and somewhat purer commercial initiative. 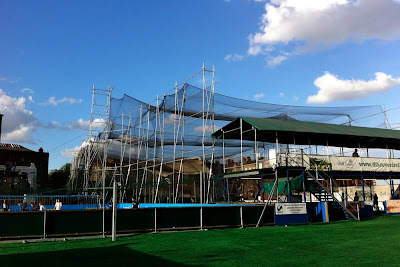 The building is shaky and fragile in appearance. Sparse scaffolding reaches up to a height of nearly 10 metres, running asymmetrically along the sides of the range. Between these inadequate structures is stretched netting, creating a ghostly veiled form into which the balls are whacked. Into one end is plugged a two storey structure from which the golfers do the whacking, and they gain access to the whacking platform by paying a bit of money at a small booth, and that's about it. 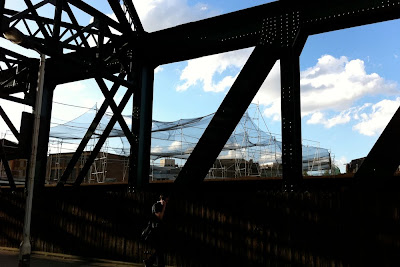 But we can see other things in this building: perhaps the most obvious reference would be Cedric Price's aviary at London Zoo, a steel tent kept up much longer than was ever intended, but a marvellously intangible piece of modernism nonetheless. Beyond that we can see that it has a certain affinity with that period of architecture in general - it is lightweight, it was quickly deployed and no doubt will quickly vanish when the time comes to build the Fostrosity, and it could probably be redeployed elsewhere at some point. But we can go even further, and see parallels with contemporary wibble architecture in its complicated and irregular forms. But it's the formal intrigue that comes not from playing around with computers and then deploying spurious metaphorical justification, but from draping some old netting between rudimentary scaffolding. 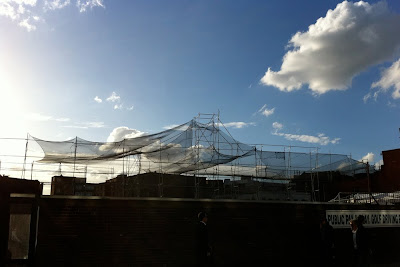 Indeed - it has another virtue: cheapness. Nobody gets cheapness right in the city. There's basically two kinds of building built in London these days - an expensive, tailored architecture at the high end of the scale, and then all the half-hearted attempts not to be out-done, built from Kit-Kat wrappers and bog roll, which are almost worthy of greater contempt. If you don't have the budget, you shouldn't pretend that you do - embrace your cheapness! Go further with it! Don't wait for your client to insist you cut the budget, cut it yourself! Make it so cheap it will terrify them, so that they won't recognise it as architecture, make it unbearable to them! Damn the tailored neo-modernism of the contemporary order - let us not forget that every time there has been a modernist lurch in architecture it has learned from rudiments, from what doesn't count as architecture, be it the shed, the silo, the crane, the airship - whatever. Today, architecture is as uptight and constipated as it was in the late nineteenth century, craven and obsequious. I look at this dumb golf range and I see the only building around that has even a hint of modernist energy these days. It is stupid, yes, but no more stupid than anything else around it.
at 10:46 pm