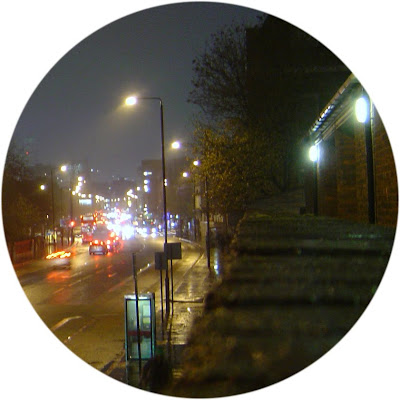 Rain Song by entschwindet und vergeht
Digging around on my clogged hard drive I found this recording that I once made. A few years back I experimented for a while with a technique whereby through a process of filtering, certain specific frequencies could be extracted from a source recording, without affecting their timbre. Sounds that had a wide range of frequencies and yet some rhythm and texture were best for this, and the rain was especially useful. This was all pre-hauntology, but the idea was quite similar - melodies could be found that were like ghosts within an existing sound, and the pieces sometimes automatically sounded like faint human voices. Unfortunately this was a very time consuming technique, involving the filtering of individual harmonic frequencies for each note, and overall I had better things to be doing. But here's one for you, created from the sound of the rain during a thunderstorm, I think sometime in 2009.
at 12:31 pm

Email ThisBlogThis!Share to TwitterShare to FacebookShare to Pinterest
About: electroacoustic, hauntology, me me me, megalomania, music, noise, sound